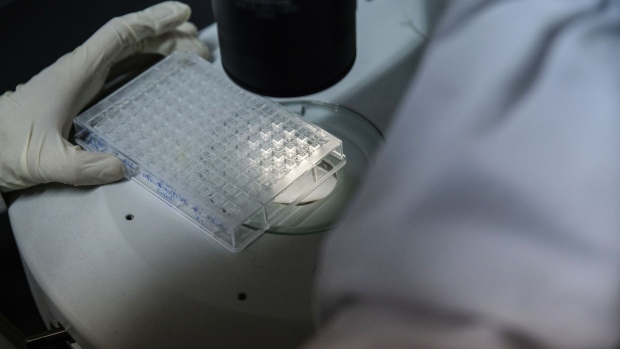 A researcher inspects samples inside a laboratory at BeiGene Ltd.'s research and development center in Beijing, China, on Thursday, May 24, 2018. Photographer: Gilles Sabrie/Bloomberg , Bloomberg

(Bloomberg) -- Recursion Pharmaceuticals Inc., which uses machine learning to hunt for new therapies, raised $436 million in an upsized initial public offering priced at the top of a marketed range.

The Salt Lake City-based company sold about 24 million shares on Thursday for $18 each, according to data compiled by Bloomberg. The company, which marketed the shares for $16 to $18, twice earlier Thursday increased the number of shares to be sold.

Recursion reached a deal with Bayer AG in September to use AI to find new drugs for lung fibrosis and other fibrotic diseases. The deal included a $30 million upfront payment and $50 million in equity funding by Bayer’s investment arm.

An investment arm of Bayer led a $239 million funding round for Recursion in September, according to a statement at the time. The company’s investors include Baillie Gifford and Mubadala, among others.

The offering is being led by Goldman Sachs Group Inc. and JPMorgan Chase & Co. The shares are expected to begin trading Friday on the Nasdaq Global Select Market under the symbol RXRX.