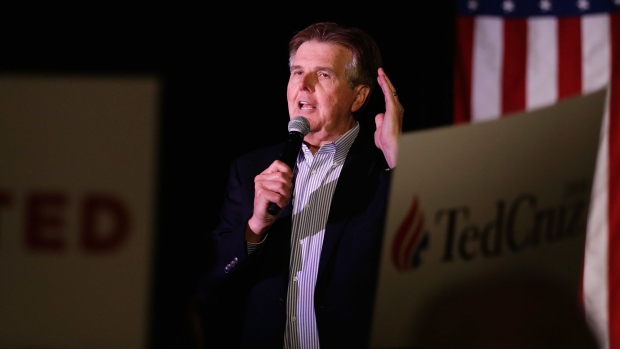 (Bloomberg) -- From West Virginia coal country down to Trump-friendly Florida and out to the Texas energy patch, billionaire Larry Fink has a new headache: a red-state uprising.

In oil-rich Texas, BlackRock is being castigated by the Republican establishment for even talking about reducing greenhouse gases. In West Virginia, where King Coal casts its shadow, it’s been cut out of a state treasury fund. And in Florida, redoubt of Donald Trump, Governor Ron DeSantis, a presidential hopeful, is targeting investments in China managed by BlackRock and others.

The money at stake -- if it’s really at stake at all -- is a pittance given BlackRock’s size. But together, the developments underscore how politics keeps seeping into the nation’s business life and risks snowballing for BlackRock so that its brand becomes a pariah among the GOP establishment. Several major banks have faced similar blowback in the normally ho-hum world of municipal-bond underwriting.

Even BlackRock, the world’s biggest money manager, is treading gingerly. The New York-based company recently hired four lobbyists to try to lower the heat in Austin, the Texas capital. It added two Republicans in Washington as well, perhaps in case the party takes over Congress after the November mid-term elections.

“This matters to us because this politicization of pension funds that we’re seeing goes against everything we stand for and our principles as an organization,” Mark McCombe, chief client officer, said in an emailed statement. “Retirees deserve financial security. As a fiduciary, our job is to help drive better outcomes for them. When you limit choice, it’s the retirees that bear the true costs.”

Red state or blue, Fink, 69, can’t catch a break. On fossil fuels -- BlackRock owns, among other things, roughly 6% of Exxon Mobil Corp. -- he’s caught in the uncomfortable middle: one side wants him to divest to save the planet, the other to stand by industry and local economies.

BlackRock’s chief executive officer has become a prominent voice in business over the past decade in urging companies to think about more than just profits. His annual letters on “stakeholder capitalism” have drawn a lot of attention, as well as criticism from both sides. Liberals say Fink is failing to back up words with action, while conservatives say he’s pandering to the woke mob.

“Stakeholder capitalism is not about politics,” Fink wrote in his latest letter to fellow CEOs, released on Jan. 17. “It is not a social or ideological agenda.’”

Trouble hit, and fast. Within 48 hours, the lieutenant governor of Texas, Dan Patrick, was accusing BlackRock of being hostile to the state’s oil and gas industry. Never mind that BlackRock has many billions invested in the fossil-fuel industry, including its huge stake in Irving, Texas-based Exxon. BlackRock is the oil giant’s second-biggest shareholder, after Vanguard Group.

Patrick called for BlackRock to be added to a blacklist that the state is compiling of companies that supposedly boycott the energy industry. Under a 2021 law, Texas can restrict state business with companies that end up on that list. The state comptroller’s office, which is still drawing it up, stressed that it isn’t targeting any companies in particular.

“It is perfectly reasonable for a state to defend a key industry,” BlackRock’s McCombe said in his statement. “This is important to get right for all parties involved and we don’t want to be portrayed as not being supportive of energy companies. We are working with them, not against them.”

To mitigate any damage, McCombe and Dalia Blass, a former senior Securities and Exchange Commission official who heads external affairs at BlackRock, have met with Texas officials in recent weeks, according to a person familiar with the matter. BlackRock executives have also met with local energy trade groups.

BlackRock has stressed that far from shunning oil and gas, the firm is one of the world’s biggest shareholders of energy companies and doesn’t have a policy of divestment -- a position that might quiet some red-state critics only to enrage blue-state ones. More than one third of BlackRock’s $260 billion in global energy investments is in Texas, according to a company spokesman.

For the first time in years, BlackRock has hired outside lobbyists in Texas. One of them is Michael Toomey, a former three-term Texas House member and the chief-of-staff to two governors. The firm plans to spend about $200,000 on Lone Star State lobbying, said a person familiar with the matter.

How events play out in Austin could determine how much money BlackRock manages for public pension funds throughout the state. Right now, it handles more than $20 billion, according to the person, who asked not to be named because the details aren’t public.

Among those clients: the $200 billion Teacher Retirement System of Texas, one of the biggest public pension funds in the country. TRS owns $45 million of BlackRock shares, and Fink’s firm oversees roughly $2.5 billion of stocks and bonds for the fund, as well as private equity and infrastructure, according to the latest available public records.

“TRS of Texas is committed to following the law and upholding the highest fiduciary standards for our 1.7 million active and retired Texas educators,” said Rob Maxwell, spokesman.

Over in West Virginia, state Treasurer Riley Moore has said doing business with BlackRock is against the interests of the state economy, which is heavily reliant on the coal industry. This month, the state’s Board of Treasury Investments, which Moore chairs, stopped using a BlackRock fund to manage short-term investments. There was a balance of almost $22 million in the fund when the state ended its use.

“They have this goal of net-zero emission standards, and what they’re doing is they’re leveraging their massive amount of capital to, in many times, change companies from the inside out, and then also at the same time impress their values and standards of the way they see the world,” Moore said in a phone interview. “What if we don’t want the same shape of society that BlackRock does?”

“I’m just very concerned in the direction that this ESG movement of which certainly BlackRock, with $10 trillion in assets under management, has a tremendous amount of influence on,” Moore said, using the acronym for environmental, social and governance investing. “Their goals, I think, are detrimental to my state’s goals and a lot of different states.”

And in Florida, DeSantis and members of the State Board of Administration want to limit pension money from being invested in China. BlackRock, which has been scaling up its business in the Asian nation, manages billions of dollars for Florida’s pensions and investment funds. As of June 30, almost $227 million was invested in a BlackRock fund focused on China’s markets, according to the most recent disclosures. The state pension plan was also invested in separate private equity and investment funds with exposure to China in particular.

DeSantis wants to pull back share-voting power from BlackRock and other outside investment managers and ensure they’re acting in the best interests of the state, according to Christina Pushaw, a spokeswoman for the governor.