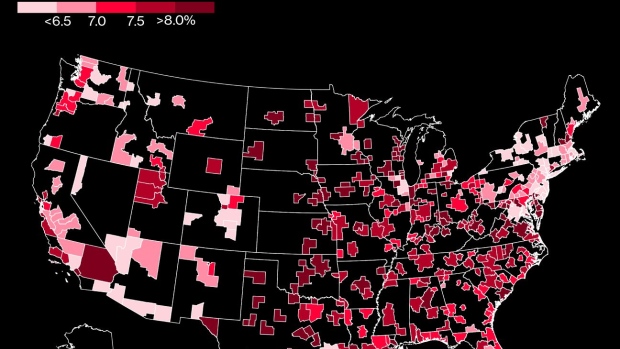 A worker carries floor joist for a single family home in Lehi, Utah, U.S., on Friday, Jan. 7, 2022. Soaring lumber prices in the past four months have boosted the price of an average new single-family home by more than $18,600, according to the National Association of Home Builders. Photographer: George Frey/Bloomberg , Bloomberg

(Bloomberg) -- The American heartland has become an inflation hotbed, highlighting how difficult it will be for U.S. policy makers to cool decades-high inflation that is gripping the economy.

Small towns in the Midwest and South are among the hardest hit, with consumer prices rising 9% or more -- faster even than the red-hot national average of 7%.

The state with the most small cities registering inflation of at least 8% last quarter was Wisconsin, a place better known for its cheese and factories than high living costs. A close second was Texas, where several oil towns experienced a surge in prices at the end of the year.

The findings are based on data from Moody’s Analytics, which include 400 metro regions. Zooming in on cities with fewer than 200,000 people provides a more detailed account than government figures, which break down consumer prices in about two dozen large cities, obscuring the local experience of more rural and suburban Americans.

A closer look on the ground in Wisconsin highlights the reality for many counties in the middle of the country, where inflation has run higher than on the East and West coasts for months and is getting sticky. The inflation pain shows up everywhere, from a paper company facing both soaring demand and surging costs to a trucking company in Fond du Lac, population 43,000, paying double last year’s price for vans.

Wisconsin’s high inflation likely stems from its small-town character and reliance on factory jobs, according to Noah Williams, a University of Wisconsin economics professor. The economy is twice as concentrated in manufacturing as the rest of the nation and people there are more likely to spend on goods -- which have undergone the biggest price increases -- than services, he said.

Midwest households also spend a higher share of their income on gas and cars, whose prices have skyrocketed. People in the region have more vehicles per household than other parts of the U.S., according to Leslie McGranahan, a vice president at the Federal Reserve Bank of Chicago.

Soaring prices in the region pose a challenge for the Biden administration, even as the Federal Reserve is preparing to raise interest rates to help cool them down. In a swing state with a Senate seat and a governor race in the midterm election this year, Wisconsin’s inflation is becoming a political issue.

In Madison, where inflation is over 9%, Tracey Elmes sees prices and labor shortages haunting Democrats this fall. She’s not happy about the local economy -- and she figures many of her fellow Wisconsin residents feel the same.

“I don’t know exactly how my fellow Wisconsinites will hold the pieces together, but it’s enough that people will want to hold someone accountable,” said Elmes, a 53-year-old registered dietitian who skews Republican but is open to voting Democratic when things are going well.

The rapid price escalation in Wisconsin is also tied to the same drivers as in the rest of the country: broken international supply chains, nonstop demand for goods, as well as higher transportation costs and wages.

It starts at the manufacturing level. In Kaukauna, a town of 16,000 people located about 20 miles southwest of Green Bay, demand is soaring at Jeff Anderson’s Precision Paper Converters, where machines convert the jumbo “parent rolls” of paper into the comfy, folded tissues we blow our noses into.

Traditionally, around one-fifth of the raw paper comes from overseas, but shipping is so expensive that manufacturers are turning to U.S. suppliers almost exclusively, boosting paper prices by about 10%, Anderson said. The cost of the boxes that hold the tissues has risen 30% in a year.

Anderson passes along what he can to his clients, but not everything.

From the factory floor, higher prices hit the road.

Jeff O’Brien runs a 60-truck delivery company, Legacy Express LLC, with about 80 employees shuttling toilet paper, snacks and motor parts across the region. In the past year, he’s bought about 20 new delivery vans, and each one cost over $40,000 -- double the previous year’s price. A used trailer costs the same as a brand new one did before the pandemic.

Soaring gas prices are hitting the business, and O’Brien is paying employees as much as 20% more. He’s passing on part of the extra costs to grocery stores and manufacturers.

“You have no choice but to raise prices,” O’Brien said from his headquarters in Fond du Lac, where annualized inflation has topped 8% for months now. “The amount of stress that you already have from the coronavirus and shutdowns, and now you have the inflation issue on top of that.”

Over in Green Bay, Chad Warpinski was paying five times more for lumber at one point, so he simply passed on the cost to retail clients like Home Depot Inc. and Lowe’s Cos. Mills are now updating prices as many as three times a week -- compared with once a year before the pandemic.

“It’s really a layering effect -- you have an increase here, an increase there, you add it all up and it’s a big number,” said Warpinski, president of Amerhart, a distributor of housing material.

Wisconsin has among the lowest unemployment rates across the country at 3%, below the prepandemic level. Many other places are also below the national 3.9% average in the so-called heartland, a region of 20 states in the middle of the country.

Even before the coronavirus crisis, Wisconsin employers were facing a tight labor market, with an aging and slow-growing population.

“It’s manufacturer versus manufacturer,” said Sadie Parafiniuk, the president of Envision Greater Fond du Lac, the county’s business group. Even if all unemployed people in the region were to fill one of the 4,500 open jobs, there would still be 2,000 open positions, she said.

Companies are asking “how do we ever come back from this? Once inflation stabilizes, you can’t take away wages,” she said.