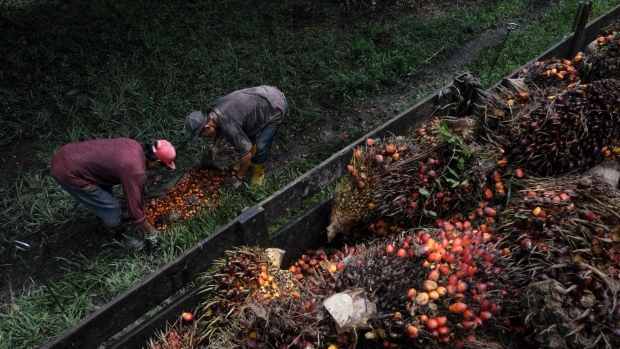 A worker sprays disinfectant inside the worker's trailer at the IOI Corp. Gomali palm oil estate in Gemas, Johor, Malaysia, on Wednesday, June 10, 2020. Palm oil stockpiles in Malaysia posted a surprise drop as of end-May as production in the world's second-largest grower eased for the first time in four months. , Bloomberg

(Bloomberg) -- Oil palm planters in Malaysia are confronting a hard truth -- behind the red-hot rally in prices are thousands of jobs that nobody wants.

While high prices typically encourage planting and production of crops, output in No. 2 grower Malaysia slumped to a five-year low last year and planters say the main reason for that is the industry’s worst-ever shortage of workers.

The inability to increase supply in response to rising prices goes to the heart of what’s driving palm oil to record highs. Output growth in top producer Indonesia is slowing too. This is important for global food inflation because the two countries account for more than 80% of world supplies, and consumption of the edible oil in everything from food, to detergent and fuel is expanding.

“The volume of palm oil that will come onto the market is more or less fixed and not going to grow very much,” said Julian Conway McGill, Head of South East Asia at LMC International, a consulting firm. “But the world keeps needing more vegetable oil for food. We need to get those yields up.”

Shunned by locals for being dirty, dangerous, and even demeaning, harvesting jobs on Malaysian estates are mostly taken by foreign workers that make up around 85% of the labor force. Planters have grappled with a decreasing supply of workers for years as harvesters -- many of whom were Indonesians -- chose to return home for better wages, or preferred jobs in the city.

“In Malaysia, there’s an image problem when it comes to manual labor and plantation work,” McGill said by phone. “The locals don’t want to do it because they consider it demeaning and unfashionable.”

The labor shortage worsened when the pandemic shut borders and the government extended a freeze on migrant hiring, cutting off access to new foreign workers. Fresh-fruit bunch yields slumped to the lowest in three decades last year, pushing palm oil production to the smallest since 2016.

“The pandemic was an eye-opener to us,” said Nageeb Wahab, chief executive at the Malaysian Palm Oil Association, a group representing 40% of plantations by area. “In the last two years we had zero workers coming in,” he said from Kuala Lumpur. “We managed to survive only because prices were very good.”

Without enough workers on the ground, planters were forced to reduce harvesting rounds and leave ripened fruits rotting on trees. While the production shortfall pushed palm to the forefront of a global rally in edible oils, plantation companies lost a large chunk of potential revenue. The Malaysian Plantation Industries and Commodities Ministry in December estimated losses last year at about $3.4 billion, and said the shortage of harvesters and fruit pickers had reached more than 25,000 as of August.

Plantations desperate for workers tried to ease the crunch by attracting locals with higher wages and hiring prisoners. But the attrition rate for locals was high, with nearly half the workers hired in 2020 leaving their jobs, while taking on parolees triggered concerns from non-governmental groups, Nageeb said.

One company making an appeal to locals is Sime Darby Plantation Bhd., the world’s biggest planter by area. But despite offering stable incomes and benefits such as free housing, subsidized utilities and day-care, the response has been lukewarm. “Work in the estates has historically been regarded as dangerous, difficult and dirty,” according to the company. “This has become a stigma which the industry needs to overcome.”

Companies are looking for ways to re-brand and revamp field work to make it more attractive to locals and cut reliance on foreign labor. That includes automation and mechanization in harvesting, as well as drone technology, artificial intelligence and robotics along the supply chain. “Work on the estates has been done almost the same way for the last 100 years,” Sime Darby said.

Nageeb, from the plantation association, is heading a government-funded group to boost technology on the estates. For him, the focus over the next three years is to halve the requirement of foreign workers by improving harvesting with mechanized and intelligent cutters. The consortium, which has been allocated an initial fund of 60 million ringgit ($14.3 million), is “casting the net out to the world,” including the U.S. and China, to develop technology that will be commercially viable in plantations in the next five years.