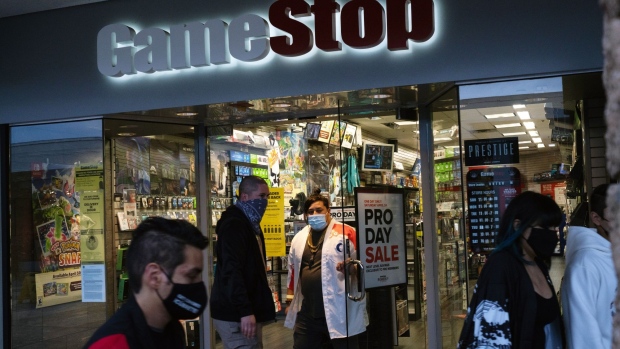 A person wearing a protective mask exits from a GameStop Corp. store at a mall in San Diego, California, U.S. on Thursday, April 22, 2021. California officials plan to fully reopen the economy on June 15, if the pandemic continues to abate, after driving down coronavirus case loads in the most populous U.S. state. , Bloomberg

(Bloomberg) -- The Reddit army’s meme-packed campaign to boost GameStop Corp.’s stock price has now resulted in one of the most conventional victories on Wall Street: a credit-rating upgrade.

Hype on Reddit’s r/WallStreetBets forum drove the once-struggling videogame retailer’s shares so high that the company was able to raise $551 million last week by selling equity. That allowed GameStop to wipe out all of its long-term debt.

S&P Global Ratings responded Wednesday, lifting GameStop’s credit rating one notch to B. After retiring $216 million of notes, the company has money left over that S&P analysts believe “will partially fund its transformational efforts.”

GameStop’s next chairman, Ryan Cohen, wants to lead a digital turnaround that prioritizes online commerce over physical retail. He has brought in new executives in charge of growth and technology to guide the overhaul.

Still, the Reddit memes and Cohen’s vision have yet to heal the company’s income statement. Results for its most-recent quarter were a disappointment. And GameStop’s credit rating remains squarely in junk territory even after the S&P upgrade.

GameStop shares briefly rallied following S&P’s announcement before turning lower, though few on Reddit are likely crestfallen: The stock is up 745% in 2021.