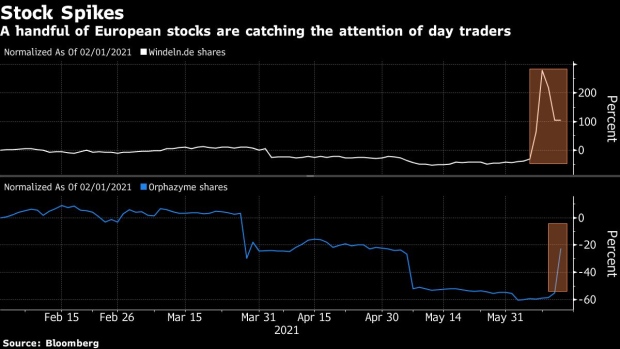 (Bloomberg) -- The meme stock mania is starting to show up in Europe.

Orphazyme A/S, a small Danish biotech firm, shot up more than 80% on Friday. Germany’s Windeln.de SE tripled this week as traders pumped up the online retailer on Reddit boards.

While the stock moves aren’t nearly as widespread as in the U.S., they’re just as erratic. In one of the weirder moves of the week, Air Berlin Plc, an airline that went bankrupt in 2017, surged. The stock went from one euro cent to three.

“It’s all a bit of fun, but when people continue to do it, they will get stung,” said John Moore, head of trading at Berkeley Capital Wealth Management.

Day traders seem to have largely moved on from Nokia Oyj, which was a favorite back in January. The stock is flat for the week.

And for every Reddit pick that’s skyrocketing, there are several going nowhere. In boards on Friday, users were promoting French biotech Neovacs as their current bet with screenshots of their trades. So far, they haven’t had much success. Neovacs, which trades at less than a cent, hasn’t budged.