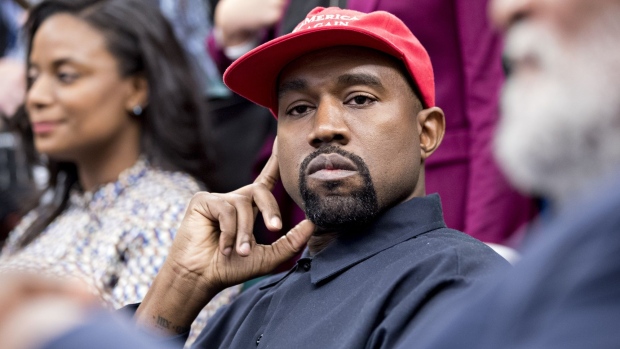 Rapper Kanye West listens during a meeting with U.S. President Donald Trump, not pictured, in the Oval Office of the White House in Washington, D.C., U.S., on Thursday, Oct. 11, 2018. West, a recording artist and prominent Trump supporter, is at the White House to have lunch with the president and to meet with presidential son-in-law and senior adviser Jared Kushner who has spearheaded the administrations efforts overhaul the criminal justice system. , Bloomberg

(Bloomberg) -- After Ye made antisemitic remarks, including declaring his love for Adolf Hitler, Reddit users have repurposed r/Kanye — a tribute to the rapper formerly known as Kanye West — into a record of the Holocaust.

On Thursday, Ye openly espoused antisemitism and false conspiracy theories about Jewish people in an interview on the far-right talk show InfoWars. His comments prompted widespread condemnation. President Joe Biden noted in a tweet that “Hitler was a demonic figure.”

Shortly after the interview, a Reddit user posted a plea to turn the r/Kanye subreddit into a “Holocaust remembrance sub.” The user, who said they grew up with the rapper’s music and was a fan, wrote, “I can't imagine keeping this place going as is.” The r/Kanye subreddit has 711,000 members, ranking it among the top 1% biggest groups on the platform.

Since then, over 150 people have responded and the comment has almost 5,000 upvotes.

Some have posted tributes to people who were imprisoned and killed in concentration camps. Another user shared an interview with a woman who survived Auschwitz. Several Redditors have posted photos of Anne Frank, Krystyna Chiger and other children who tried to flee the Nazis.

This is officially a holocaust awareness sub. from Kanye

Emily Tamkin, a journalist and the author of the book Bad Jews: A History of American Jewish Politics and Identities, said the phenomenon was heartening. “[These] are people people who love the music or love him, and who decided that was less important than condemning antisemitism and historical revisionism,” she said.

Elsewhere on the subreddit, a moderator said that they’ve banned users and taken down “dozens and dozens” of posts and comments. “We’ll continue cracking down on clear and obvious hate speech and antisemitism. This is top priority and it has been for a long time now,” one wrote in a post five days ago.

The topic of closing the page altogether has been broached, but people who run the page have so far opted against it, a moderator told Bloomberg News. The subreddit was created not for the rapper but for fans and former fans, the majority of whom who do not share or endorse his opinions, the moderator said.

Reddit’s terms of use will ban “communities and people that incite violence or that promote hate based on identity or vulnerability.”

The Anti-Defamation League last year counted 2,717 incidents of assault, harassment or vandalism targeting Jewish people — a 34% increase from 2020, and a record since the group first started keeping track over four decades ago.

Gil Preuss, the chief executive officer of the Jewish Federation of Greater Washington, previously told Bloomberg that “public personalities are increasingly willing to use not even antisemitic tropes but direct antisemitic language.”

(Updates with comments from page’s moderator.)