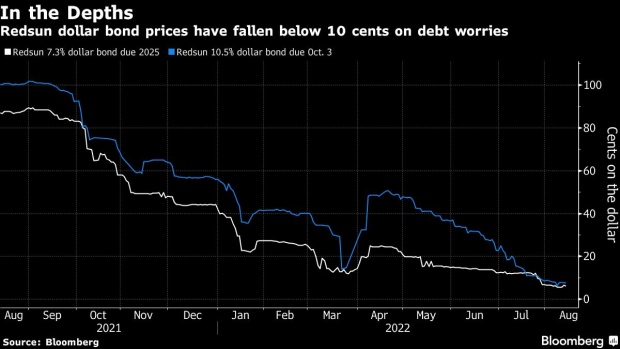 (Bloomberg) -- Redsun Properties Group Ltd. is poised to become China’s latest developer to be delinquent on borrowings, warning it likely won’t pay a bond coupon before a Friday deadline and may be unable to meet other debt obligations.

The country’s 88th-largest builder by contracted sales said in a Hong Kong stock exchange filing it likely wouldn’t pay the 2025 note’s coupon initially due last month before the end of a grace period, potentially resulting in demands for immediate redemption of the note and acceleration of other debt. Redsun also can’t guarantee it will be able to meet obligations on other offshore notes and bank loans as they come due.

The company has paid $1.5 billion of principal and interest this year, including $616 million on offshore debt, according to the filing. Still, “it remains under significant pressure,” said Redsun. It’s hired Haitong International Securities Co. as its financial adviser and Linklaters LLP as its legal adviser.

Investors have had their doubts about timely payments from Redsun. Its dollar bonds are below 10 cents on the dollar, according to Bloomberg-compiled prices, and the 2025 notes has been under 30 cents since January. Redsun’s dollar bonds were indicated as much as 0.7 cent lower Friday and shares briefly fell to a fresh record low. The stock has plunged nearly 60% this quarter.

Fitch Ratings downgraded Redsun and parent Hong Yang Group Co. to C and then withdrew all grades, saying the firms have chosen to stop participating in the ratings process. “A default-like process has begun” in the wake of Redsun’s interest-payment warning, said Fitch.