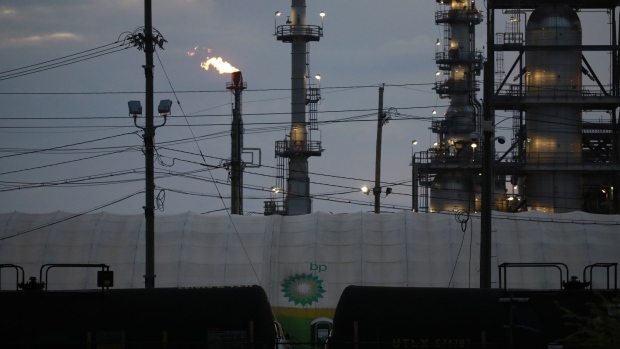 (Bloomberg) -- After several years of plant closures and conversions to make renewable fuel, the pressure on American refiners to shut down excess capacity is easing as gasoline demand nears pre-pandemic levels and supplies dwindle.

Since 2019, North American refiners have reduced crude-processing capacity by about 1.25 million barrels a day, according to energy consultant Turner Mason & Co. Some units had already shut when the pandemic decimated demand and kept Americans off the road in droves. Companies were bleeding money and casting a hard eye on their portfolios, and by the beginning of 2021, refinery capacity stood at 18.1 million barrels a day, the lowest since 2015.

Today, things are looking up again. Measured on a four-week average, U.S. gasoline demand at 9.4 million barrels a day has bounced back to within about 150,000 barrels of 2019 levels for the same time of the year. Meanwhile, gasoline stocks are the lowest since November 2017. And the gasoline crack on the New York Mercantile Exchange, a rough gauge of the margin refiners can capture with a barrel of crude based on futures prices, was trading near $16 a barrel on Friday, the highest seasonally since 2017.

“I think we have shut down enough capacity,” said John Auers, executive vice president at Turner Mason in Dallas. “Unless there is a major economic recession, we see a fairly strong environment for demand.”

Underpinning the strength for U.S. refining, particularly for Gulf Coast operators, soaring natural gas prices in Europe and Asia are making U.S. exports more attractive, said Andy Lipow, president of Lipow Oil Associates in Houston. “We’re probably still over capacity. But if this were to continue, there would be no need to shut additional capacity in the U.S.,” he said.

The future of one U.S. refinery, Phillips 66’s Alliance plant in far south Louisiana, remains undecided. The company has been trying to find a buyer for the 255,600-barrel-a-day plant, which was shut in August with heavy damage from Hurricane Ida. The refiner said Friday it continues to “assess future strategic options.”

Exxon Mobile Corp. and Chevron Corp. executives both said Friday that demand for light-vehicle and heavy-duty fuels rebounded strongly in the third quarter. But Exxon CEO Darren Woods warned refining margins wouldn’t fully recover until aviation rebounds, and facilities can utilize the heavier part of the barrel again. Exxon warned that when the downstream oil industry experiences a peak or goes through a tight supply-demand balance, it doesn’t last long.

“The U.S. has lost a lot of capacity but over the next five or six years, more capacity will have to shut,” Campbell said.