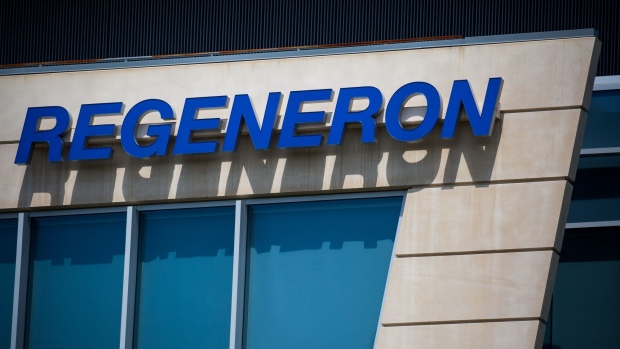 The Regeneron Pharmaceuticals Inc. “antibody cocktail” given to President Donald Trump to treat his COVID-19 symptoms was developed with the unauthorized use of a fluorescent protein, according to a lawsuit by a California company that patented the technology.

Allele Biotechnology and Pharmaceuticals Inc., a closely held company founded in 1999, sued Regeneron on Monday in New York seeking royalties for the use of its mNeonGreen protein in developing the treatment.

A fluorescent protein is injected into cells so researchers can watch what’s happening -- to determine, for example, how a virus reacts to an antibody. The patent for mNeonGreen, issued in March 2019, covers the use of the protein, which Allele said scientific journals have dubbed the “gold standard” for testing the efficacy of antibody and vaccine candidates.

Hundreds of organizations and universities, including the U.S. Food and Drug Administration and the National Institutes of Health, have active licenses to use Allele’s technology, Allele said. The San Diego-based company said it reached out to Regeneron several times to negotiate a license, but the requests went unanswered.

Representatives of Regeneron didn’t immediately respond to a request for comment.

According to Allele’s founder, Chief Executive Officer Jiwu Wang, mNeonGreen is so bright when used in testing that the camera can detect changes in a split second, which enables researchers to look at different antibodies to see which works best in less time. The fluorescent protein was developed without funding from the federal government and most of its licenses are academic and non-transferable, Wang said.

“What we’re really looking for is recognition for Allele’s role in the advancements that are here, and maintaining our patent rights,” Daniel Catron, the company’s executive director of licensing and business development, said in an interview. “And also, just urging others to go ahead and pick up the phone and speak with us.”

Early studies indicate Regeneron’s treatment, which Trump received before leaving the White House for the hospital on Friday, may help reduce virus levels. Patients don’t usually have access to experimental treatments unless they’re part of a clinical trial, but companies consider special requests for so-called compassionate use in limited circumstances.