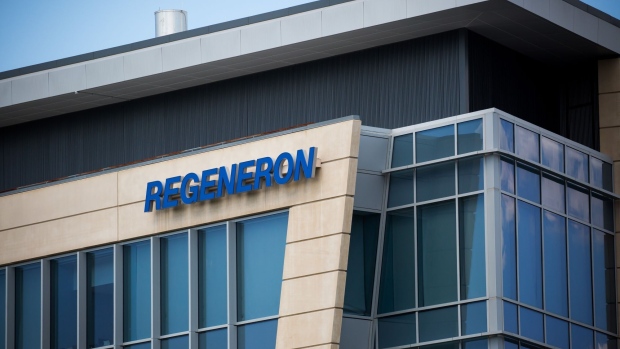 Regeneron Pharmaceuticals Inc. signage is displayed outside their headquarters in Tarrytown, N.Y., U.S., on June 12, 2020. Regeneron Pharmaceuticals Inc. said it had begun human trials of a new antibody cocktail for Covid-19, part of an ambitious clinical-testing plan that could lead to a new treatment option by the end of summer if all goes well. Photographer: Michael Nagle/Bloomberg , Bloomberg

(Bloomberg) -- Regeneron Pharmaceuticals Inc. said it is conducting further testing after early evidence suggested that its antibody therapy for Covid-19 may be less effective against the omicron variant.

After some analyses suggested that the variant’s mutations may reduce the protection provided by vaccines and monoclonal antibodies, the company said in a statement on Tuesday that it is doing testing “to confirm and quantify this potential impact using the actual omicron variant sequence.”

Shares of Regeneron, which had gained 35% this year through Monday, were down 1.9% before the start of regular trading in New York.

Financial markets have been roiled in recent days by the prospect that the spread of a new pathogen could upend the global economic recovery. Fear that vaccines and current therapies could be less effective in fighting the virus have heightened those concerns.

Regeneron said that its therapy remains highly effective against the delta variant that is currently responsible for most infections in the U.S. Omicron hasn’t yet been detected in the country.

It also said other antibody treatments it has in development could prove effective against omicron.

“Preliminary analyses suggest that several of these next generation antibodies may have the potential to retain activity against the omicron variant, as well as the other existing variants of concern,” the company said.