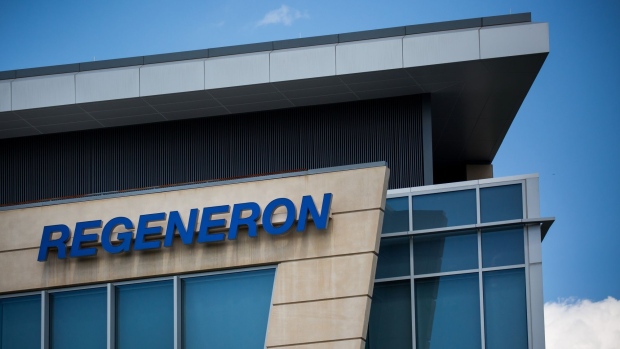 Regeneron Pharmaceuticals Inc. signage is displayed outside their headquarters in Tarrytown, N.Y., U.S., on June 12, 2020. Regeneron Pharmaceuticals Inc. said it had begun human trials of a new antibody cocktail for Covid-19, part of an ambitious clinical-testing plan that could lead to a new treatment option by the end of summer if all goes well. Photographer: Michael Nagle/Bloomberg , Bloomberg

(Bloomberg) -- Regeneron Pharmaceuticals Inc. beat Wall Street expectations for the second quarter as sales more than doubled from a year earlier, boosted by orders of the drugmaker’s Covid-19 antibody cocktail.

Revenue in the period surged to $5.14 billion, well above the average estimate of $4 billion, according to data compiled by Bloomberg. Some $2.76 billion of the total came from the company’s REGEN-COV coronavirus treatment, the company said in a statement. Profit also increased to $25.80 a share, 50% higher than Wall street expected.

After delivering 1.25 million doses of REGEN-COV to the U.S. government, the company said usage of the antibody treatment is trending up, with over 50,000 doses now ordered weekly across the country. Along with increased patient use, Chief Executive Officer Leonard Schleifer said national trends in Covid infections in the coming weeks will be the most important variable for predicting third-quarter demand for the therapy.

“If that trend continues, along with the trend of unfortunately more cases, obviously we’re going to have to go in the direction the government wants, either another contract or a commercial switchover,” Schleifer said. The drugmaker said the antibody cocktail, a combination of casirivimab and imdevimab, remains effective against all known variants, including the highly transmissible delta variant now surging across the U.S..

Since the Food and Drug Administration first granted emergency-use authorization to the therapy last November, REGEN-COV has been approved at a lower dosage, via subcutaneous injection, and as a post-exposure preventative therapy for high-risk individuals. The company now seeks its approval for preventative use in a greater set of high-risk individuals, as well as for the treatment of hospitalized patients after phase 3 trials significantly reduced mortality rates in those patients.