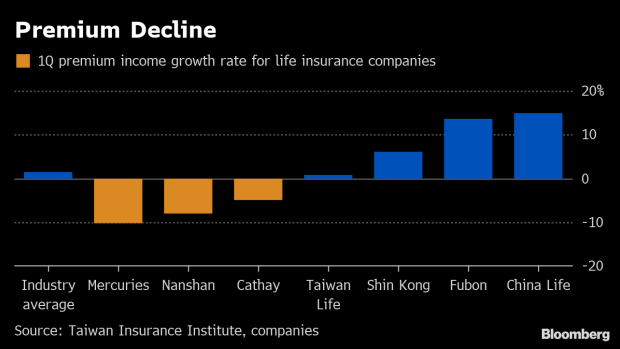 (Bloomberg) -- Taiwan’s chief financial regulator is urging people to stop using life insurance as a way to make money and he points to his own family as part of the problem.

The widespread use of life insurance as a wealth-management product has made Taiwan into the most insured market in the world. But it has also created a level of competition and reckless offers that threaten the stability of an industry with $876 billion in assets, the Financial Supervisory Commission Chairman Wellington Koo said in an interview Monday.

The problem is one Koo is personally aware of. The 60-year-old readily admits he and his wife, Taiwan’s deputy economics minister Wang Mei-hua, have nine high-return fixed term insurance policies between them. He says they were taken out on his behalf by his mother on the advice of staff at her local bank.

Taiwan’s insurers have seen huge success attracting new customers with fixed-term policies offering attractive returns, turning the economy into the most insured market in the world measured by total premiums to GDP, according to reinsurer Swiss Re AG. But slowing revenue growth, new international financial reporting standards and increasingly volatile currency markets could potentially put some companies at risk.

Taiwan’s life insurance companies controlled NT$27.5 trillion ($876 billion) in assets as of the end of March, according to the Taiwan Insurance Institute, dwarfing the island’s $567 billion economy. And while they raked in a record NT$3.5 trillion in premiums last year the rate of growth is slowing. After increasing as much as 13% in 2012, premium revenue grew only 1.4% in 1Q this year.

Koo is trying to persuade life insurance companies to shift away from attracting customers with high-interest returns in favor of stronger insurance protections to minimize the companies’ risk from high payouts to clients and volatile currency markets.

The FSC has already requested insurers to ensure protection-focused insurance policies make up at least 60% of their products. Next, Koo said, the regulator will start paying closer attention to the stability of insurers’ operations.

The shift in how insurers market their products to customers comes as the industry is preparing for the implementation of IFRS 17. The FSC aims to have Taiwan’s insurers in line with the new international accounting standards by 2025. Moody’s pointed to Taiwan’s insurance industry, alongside Germany’s and South Korea’s, as those most likely to be affected by IFRS 17 in a report in May.

Asked whether any insurers might need government assistance in order to adapt to the new regime, Koo said he was confident companies would manage the transition.

“I don’t think any insurers will be unable to respond in time.”

To contact the editors responsible for this story: John Liu at jliu42@bloomberg.net, Jeanette Rodrigues, Katrina Nicholas