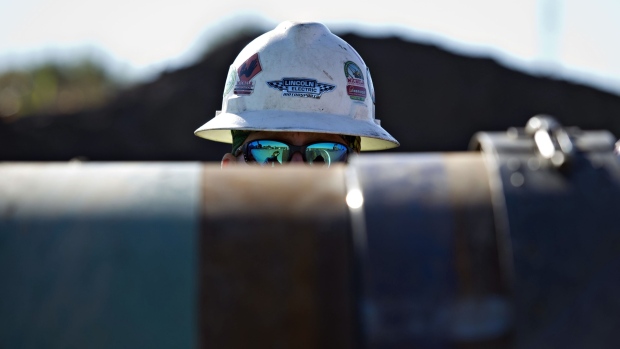 A Michels Corp. contractor watches as two sections of pipe are prepped for welding during construction of the Flanagan South crude oil pipeline outside Goodfield, Illinois, U.S., on Tuesday, Oct. 8, 2013. The approximately 600-mile, 36-inch crude oil pipeline is being constructed by Enbridge Energy Co., a subsidiary of Enbridge Inc., Canada's largest oil transporter, and will originate in Flanagan, Illinois and terminate in Cushing, Oklahoma. , Daniel Acker/Bloomberg

The state’s Public Utilities Commission approved a revised environmental impact statement and agreed to reinstate the project’s certificate of need on a 3-1 vote on Monday, according to Juli Kellner, a spokeswoman for Calgary-based Enbridge. The commission still must approve the pipeline’s route.

Enbridge’s expansion of Line 3 is a major project for the Canadian oil industry, which has been hurt by a lack of pipeline capacity. The $9 billion project would add 370,000 barrels of daily shipping capacity along a roughly 1,000-mile (1,600-kilometer) route from the Alberta oil hub of Hardisty to Superior, Wisconsin.

The project had been delayed by a year because of opposition from indigenous groups and environmentalists, as well as permitting issues. The delay caused Alberta to extend its mandatory oil-output cuts for a year to prevent a glut from forming in the province.

Enbridge’s plan hit a snag in June, when Minnesota’s Court of Appeals ruled that the project’s environmental impact statement was inadequate, saying it didn’t address the potential effects of a spill into the Lake Superior watershed. The revised impact statement approved on Monday included study of a potential spill.

The expansion avoided a possible obstacle in September, when the Minnesota Supreme Court denied petitions for further review from non-profit groups opposing the project.