Working remotely has its downsides: Cramped apartments, endless Zoom calls, juggling child care duties. But for many Black workers in white-collar jobs, getting out of the office has resulted in a vast improvement in their employee experience.

Over the past year, Black workers in so-called “knowledge” roles, like graphic design or data analysis, are more likely to say they’ve been treated more fairly, value their co-workers more and feel more supported by management, according to a survey by the Future Forum, a research consortium created by software maker Slack Technologies.

The survey of more than 10,000 people saw a 26 percentage point increase in Black respondents reporting “I am treated fairly at work” from a year ago, and similarly big jumps in other questions about their work lives. Overall, Black workers in the U.S. said their job experience was steadily improving, while responses plateaued among other racial groups in the most recent survey. 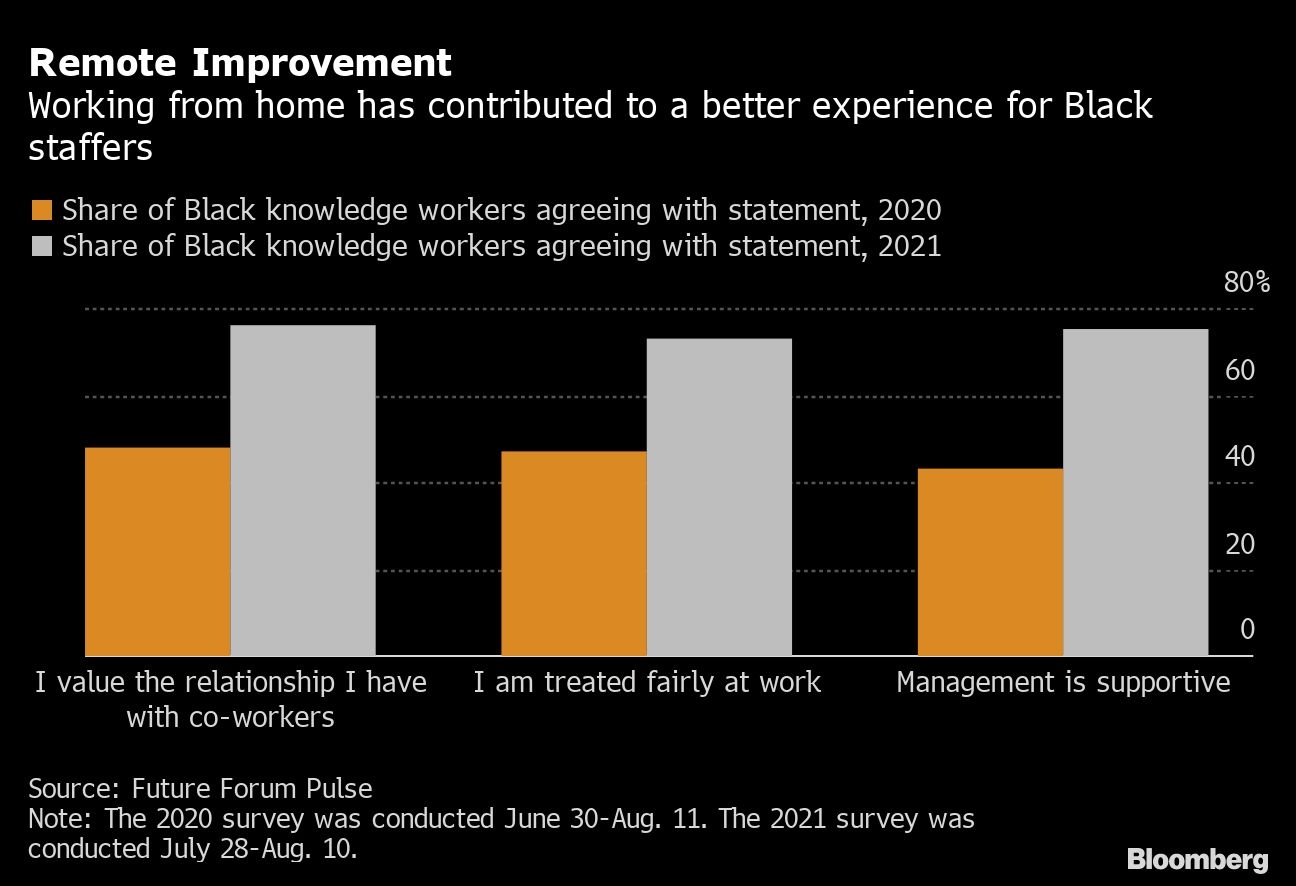 “Going virtual levels the playing field,” said Ella Washington, a management professor at Georgetown University’s McDonough School of Business. “Because everything is virtual, there's less of this informal chatter we had in person. So that’s going to make anybody feel morelike they belong, especially folks that are not usually in those conversations.”

The findings support longstanding research that shows Black workers, especially Black women, feel less valued and respected by colleagues. Black people make up a disproportionately small percentage of employees across the biggest U.S. companies — and their ranks thin higher up the corporate ladder. Racism, discrimination, and every day slights are among the many reasons they say they can’t advance.

Slack, which commissioned the survey and makes virtual collaboration software, benefits from a more remote workforce. There are also many reasons a person’s job experience could improve over the last year, besides working remotely. Still, the findings further complicate return-to-office mandates, especially as companies attempt to meet pledges to improve diversity.

While the Delta variant has delayed most companies’ plans to come back in person imminently, cities like New York and London are seeing an uptick in staff returning to their desks. Two-thirds of executives in the Future Forum poll said they’re designing post-pandemic workforce policies with little to no direct input from employees, which could lead to dissatisfaction and increased employee turnover in the months ahead.

More than three-quarters of employees polled wanted flexibility in where they work and almost all — 93% — want flexibility in when they work. But a higher proportion of Black respondents want a fully or mostly flexible schedule, the survey found, compared with White workers. Some companies are heeding that demand: PwC, the accounting and consulting firm, said last week that its 40,000 U.S. client-service employees could work remotely in perpetuity, becoming one of the biggest employers to do so.

Such freedom matters to all but “makes the most significant difference for underrepresented and historically marginalized populations,” the Future Forum survey found.