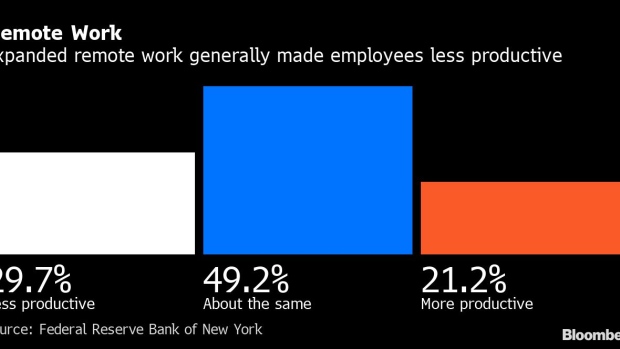 (Bloomberg) -- More New York area service firms think remote work is hurting productivity than helping it, according to a survey released by the Federal Reserve Bank of New York.

Among firms from a wide range of industries outside of manufacturing, 30% reported a negative effect on productivity, while 20% indicated a positive effect. The remaining half noted little change, per the data released Tuesday.

The findings of the survey -- which polled 150 business executives in the tristate area, who are typically considered proponents of in-person work -- are at odds with other data that’s shown remote work has been beneficial to productivity. Research has also found that the practice can improve job satisfaction and even lower quit rates without harming productivity, which is generally defined as output per hour, or one’s efficiency in completing a task.

Nearly 70% of service firms and just under half of manufacturers said they had expanded remote work options relative to before the pandemic, the New York Fed survey found. That’s allowed nearly 16% of service-sector businesses to reduce their real estate footprint, and another 11.4% anticipate further shrinking over the next one to two years.

Almost 30% of service employees were estimated to now be working remotely at least some of the time, with most doing so on Mondays and Fridays. Businesses say employees are currently working remotely an average of 3.3 days a week, and they see that moderating to 3.2 days a year from now.