Renault SA’s chief declared the automaker is firmly on the comeback trail after a record loss, forecasting stable profitability despite the global chip shortage and rising raw material prices.

The carmaker has “abandoned the approach of only looking for sheer growth,” Chief Executive Officer Luca de Meo said in a Bloomberg TV interview. “We are actually back from hell with this first semester.”

Renault swung to net income of 368 million euros (US$437 million) during the first half, from a 7.4 billion-euro loss a year ago. Renault now expects shortages in semiconductors to cost the company about 200,000 vehicles this year, double a previous estimate.

Giving financial guidance for the first time in 2021, the company expects full-year operating margin to be roughly in line with the 2.8 per cent achieved in the first half. That’s just short of its 3 per cent target for 2023, although well below competitors.

“I think the worst is behind us,” the CEO told analysts. “The auto business operating margin is back in the black so we’re making money on our core business again.” 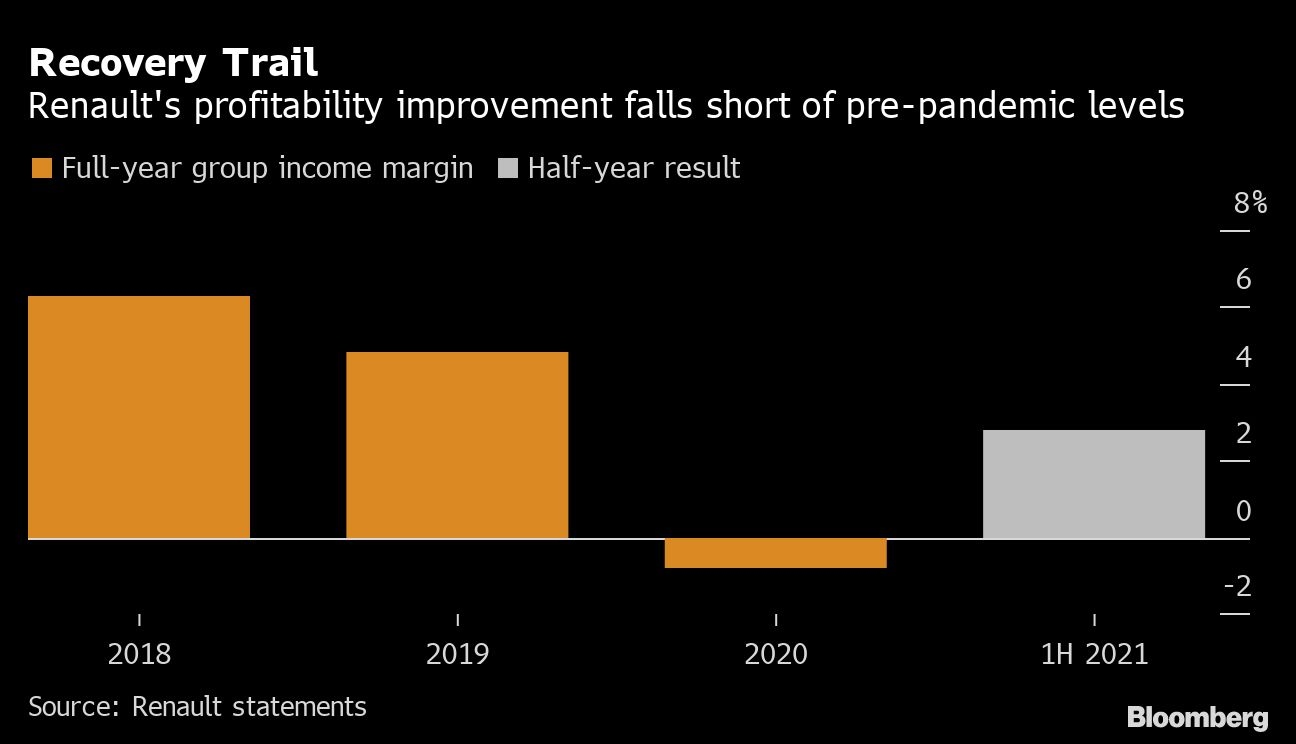 Renault reversed an initial advance to decline 2.2 per cent at 11:40 a.m. in Paris trading. The stock is down about 9 per cent since the start of the year and trails far behind gains in the Stoxx Europe 600 Automobiles & Parts index.

Renault has lagged rivals Volkswagen AG and Stellantis NV because of its reliance on the European market, which has recovered more slowly than China or the U.S. from the initial pandemic onslaught. The manufacturer’s lineup of lower-returning mass-market vehicles also offers fewer options compared to competitors that have prioritized making more lucrative models with what chips they have available.

Just over a year after de Meo took the helm, he told Bloomberg on Friday the automaker’s absence from the Chinese market is “unacceptable” and its global footprint should be broadened.

Higher prices for raw materials like steel are expected to hit the carmaker much harder in the second half, according to deputy-CEO Clotilde Delbos. The impact could be as high as 600 million euros, she said.

Renault sold 1.42 million vehicles worldwide in the first half, 19 per cent more than last year but still down almost a quarter from the same period in 2019.

Inventories at the end of the latest quarter stood at 427,000 vehicles compared with 486,000 at the end of last year. Many carmakers have benefited from surging prices after the chip shortage reduced the amount of cars on dealer lots.

The pandemic has added to pressures on Renault stemming from overcapacity in its factories and problems at Nissan. Renault took a 5 billion-euro French state-backed loan last year and earlier this year sold its stake in Daimler for 1.14 billion euros to safeguard its credit ratings.

De Meo unveiled a turnaround plan in January that underwhelmed investors. The carmaker is targeting an operating margin of at least 5 per cent by mid-decade compared with a 4.8 per cent return in 2019. Stellantis, formed from the merger of Renault arch rival PSA Group and Fiat Chrysler, wants to generate a double-digit adjusted operating income margin by around 2026.

Renault reported a much better than expected 1H Ebit margin of 2.8 per cent, almost achieving its 2023 3 per cent margin target -- which we always viewed as conservative -- that lays the foundation to upgrade its “Renaulution” 2025 plan goals. The 1H was good quality with enhanced pricing and cost savings, as well as free cash flow that came close to breakeven. Renault’s relatively new CEO still needs to address the company’s joint shareholdings with Nissan to unlock their value.

Renault is working to eliminate about 14,600 jobs worldwide and lower production capacity by almost a fifth in a bid to cut costs by more than 2 billion euros.

The carmaker has cut 1.8 billion euros of costs and said it now expects to reach a 2 billion-euro goal by year-end, ahead of schedule.