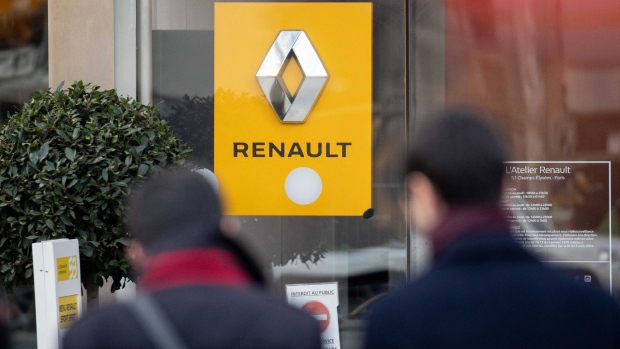 A sign sits outside the Renault SA flagship store on the Champs Elysee in Paris, France, on Monday, Nov. 19, 2018. Chairman Carlos Ghosn, a towering figure who saved Nissan Motor Corp. from collapse and brought it together with Renault and Mitsubishi Motors Corp., was detained Monday in Tokyo over the suspected breach of Japanese financial laws, Nissan Chief Executive Officer Hiroto Saikawa told reporters in Yokohama, Japan. , Bloomberg

Renault SA Chairman Jean-Dominique Senard promised to improve relations with partner Nissan Motor Co., telling shareholders at an annual meeting in Paris that broken trust between the companies is reparable.

“The priority is to restore a strong alliance,” Senard said Wednesday, noting that time, patience and effort from both sides will be needed. “Trust has to be earned,” he said.

Senard, 66, is facing investors for the first time since taking the helm in January, two months after the arrest of his predecessor, Carlos Ghosn, on charges of financial crimes in Japan. Brought in by the French government -- Renault’s most-powerful shareholder -- to patch up relations with Nissan, Senard has done the opposite. He further rocked the partnership by pushing and failing to get a merger with the Japanese automaker and then with Italian rival Fiat Chrysler Automobiles NV.

The fallout from the Ghosn affair “left the alliance more damaged than what was initially apparent,” Senard told shareholders. The partnership “is making a new beginning that needs to be confirmed.”

Ghosn’s downfall on charges he denies has had profound effects on both Renault and Nissan, serving to exacerbate a climate of mutual suspicion between the carmakers and creating internal turmoil as revelations unfolded about his alleged financial transgressions. As head of Renault, Nissan and the third partner, Mitsubishi Motors Corp., Ghosn had unusual powers that helped hold the alliance together.

“Senard is in a tricky situation,” said Denis Branche of Paris-based Phitrust, a Renault shareholder that opposed the deal with Fiat. “He made Renault’s governance healthier, but there’s still work to do. And the issue of the governance of the Renault-Nissan alliance remains.”

At the heart of the problem is a lopsided shareholding arrangement and a 2015 agreement on governance that is open to interpretation. Renault owns 43% of the Japanese carmaker with voting rights, while Nissan has a 15% stake in Renault, stripped of votes. The 2015 accord, known as RAMA, limits the French carmaker’s influence at Nissan.

Senard’s talks with Fiat on a merger behind Nissan’s back have only added to the tension. The deal was scuttled by the Japanese automaker’s decision not to lend support, a pre-condition laid out by the French government. In an apparent retaliatory move, Senard has threatened to block critical governance changes at Nissan.

Nissan is “trying hard” to make progress in reaching a common understanding with Renault, CEO Hiroto Saikawa said in a late-night interview Monday.

In the aftermath of Ghosn’s departure, shareholders on Wednesday will vote on board room changes including Senard’s appointment. Annette Winkler, the former head of Daimler AG’s Smart brand is also nominated, while directors Cherie Blair and Philippe Lagayette will leave.

After Fiat pulled its offer, speculation spread that Senard would resign. Instead, President Emmanuel Macron called him to reiterate his support -- and make sure he would stay, said a person familiar with the matter, who has dismissed the possibility of a resignation.