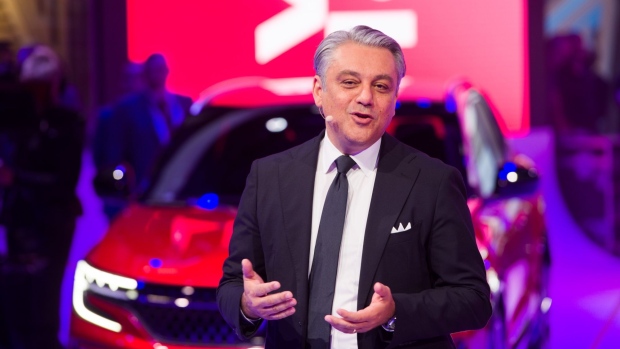 Uchida will attend a board meeting of the operating alliance on Tuesday at Renault headquarters in Boulogne-Billancourt, outside Paris, said the people, who asked not to be identified discussing private matters. Nissan Chief Operating Officer Ashwani Gupta is also expected to attend, one person said.

Nissan, Renault and junior alliance member Mitsubishi Motors Corp. are trying to reboot a partnership that’s become problematic over the years. Tentative plans for a meeting in London on Dec. 7 to discuss the alliance’s future were scrapped, the people said.

Media representatives for Nissan and Renault declined to comment when contacted by Bloomberg News outside of normal office hours.

Discussions with Nissan started earlier this year as Renault began work to carve out its electric-vehicle business, known as Ampere. Nissan may invest $500 million to $750 million for a stake of about 15% in Ampere, but the agreement hinges on a wider deal that would see Renault trim its own 43% stake in Nissan to about 15% over time, Bloomberg has reported.

The shift would alleviate a power imbalance that’s been a source of friction between the companies for years.

Nissan is in talks “every day” with Renault to bring the alliance “to the next step” and “become stronger together,” Uchida said in an interview with Bloomberg in New York on Thursday.

De Meo and Uchida still aim to sign a non-binding agreement before year-end, but the talks could also either drag on or collapse, with differences over shared technology and IP among the sticking points, the people said.

The alliance was struggling even before the 2018 toppling of Carlos Ghosn, who was then its chairman and widely seen as the glue holding the group together. The reset is all the more urgent as automakers globally grapple with a costly and difficult transition to electrification.

Senard and de Meo expressed optimism about the ongoing Nissan talks in recent weeks, but called the negotiations complex and cautioned about setting any deadlines.