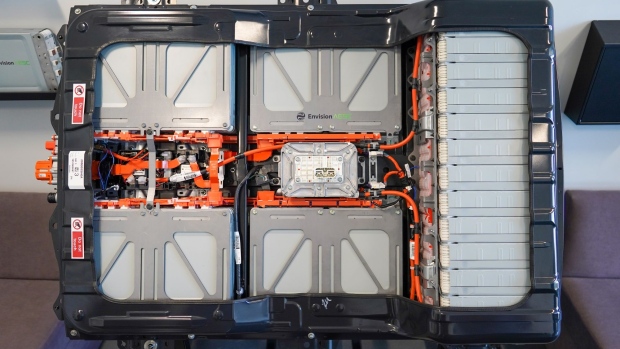 A finished battery for the Nissan Leaf automobile at the Envision AESC Holding Ltd. battery manufacturing facility inside the Nissan Motor Co. plant in Sunderland, U.K., on Thursday, July 1, 2021. Nissan said it will create a new 1 billion pound ($1.4 billion) hub for making electric vehicles in Britain, part of the carmaker’s revamp of its U.K. electric-car strategy and a post-Brexit boost for Prime Minister Boris Johnson. , Bloomberg

The funds, which were already announced separately by the carmakers last year, will be spent over five years on shared manufacturing platforms, batteries as well as operating systems, the companies said Thursday. Nissan will lead the development of solid-state battery technology while Renault will launch a “software-defined” car by 2025.

“These are massive investments that none of the three companies could make alone,” Renault Chairman Jean-Dominique Senard said in a statement.

The plans mark a step forward in the three-way alliance that also includes Mitsubishi Motors Corp. that’s still seeking to rebuild itself after nearly falling apart following the downfall of alliance architect and leader Carlos Ghosn. After Renault and Nissan blazed an early EV trail with their best-selling Zoe and Leaf models, competition is heating up and the vehicles have since been leapfrogged by models from Tesla Inc. and Volkswagen AG.

As part of the push, the alliance will slim down its number models to 90 from a current 100, while boosting commonality to more than 80% from 60% by 2026. By the end of the decade, the alliance aims to have 35 electric models with 90% platform commonality.

The alliance is also planning to unveil a fifth EV platform, adding to the four already developed. Additionally, the next generation of Nissan’s Micra hatchback will be an EV to be produced in France, the companies said.

The latest road map for the alliance, which began in 1999, marks a focus on practical ways for the automakers to pool their resources, even as the imbalance in the cross-shareholding tie-up remains.

Renault holds a 43% stake in the bigger Japanese company with voting rights, while Nissan owns 15% of Renault and has no voting rights. This has been an unresolved source of tension between the partners, although they have said that their primary focus is making the alliance work better operationally.

Nissan in November outlined 2 trillion yen ($17.5 billion) of investment over the next five years on EVs and batteries including 15 new electric models and a pilot plant for solid-state batteries in Yokohama.

In June, Renault mapped out a 10 billion-euro EV bet on battery supply, powertrains and new models. It plans to introduce ten new battery-powered cars by 2025, including in the higher-margin SUV segment.

Nissan and Renault, which are both working on turnaround plans, have already agreed to supply deals with China’s Envision Group, which is set to spend as much as 2 billion euros on a battery factory near Renault’s auto plant in Douai, France and invest in cell making at a Nissan plant in the U.K.

The alliance last outlined a common strategy in May 2020 in the form of a “leader-follower” system, where each company would occupy the driver’s seat in certain regions and for some technologies and take the back seat in others. That plan hasn’t completely taken with Renault seeking to forge its own path in China.

Keeping the partnership together has been made more difficult by pandemic travel rules that have mostly prevented top executives from meeting in person. Rival carmakers Fiat Chrysler and PSA Group combining last year to form Europe’s second-biggest carmaker — Stellantis NV — has also dialed up the pressure.