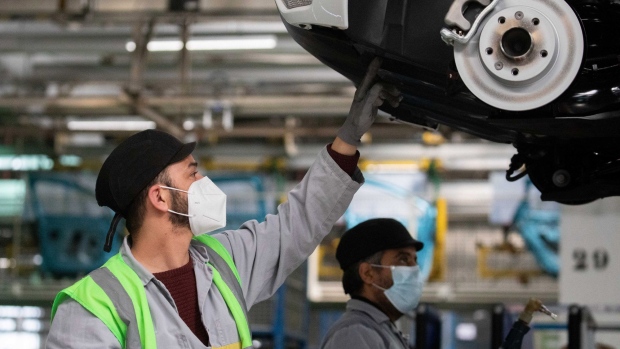 (Bloomberg) -- Renault SA’s new joint venture with fuel-cell maker Plug Power Inc. to build hydrogen-powered vans has a new name -- and a time line to hit the market this year.

Each of the three models will be based on Renault’s Master line of vans -- a key to reaching the market quickly. All will use the same electric motors that now power the all-electric version of the Master. The joint venture was announced by the two companies in January.

The venture represents a bet by Renault that hydrogen will play a key role in transportation as the world shifts from fossil fuels. That thinking is reflected in the new name, a combination of “hydrogen” and “via,” the Latin word for road. Fuel-cell vehicles produce no greenhouse gas emissions, and they can refuel with hydrogen in as little as three minutes -- far faster than an electric vehicle can recharge its battery pack. Fuel-cell vehicles are also lighter than their battery-electric competitors, a distinct advantage for delivery vans and trucks.

“You can refuel in a few minutes and go about business as usual,” Holderbach said. “We reach limits of usage with EV solutions, because you need to carry a heavy payload with the batteries.”

Two of the vans will be designed for delivering goods, while the third will be configured as a bus. Hyvia also will supply customers with hydrogen to run the vans, and charging stations for delivering the hydrogen.

Plug Power built its business making fuel cells for forklifts and other warehouse gear. But the company has signed a series of deals in the last year to expand into other businesses, including making and distributing hydrogen. Plug and Renault have not disclosed how much they are investing in Hyvia.

A Renault plant in Batilly, France, that already makes the Master van will build much of the new vehicles. But the fuel cells will be built in Renault’s Flins factory, near Paris, while a third facility nearby will integrate the fuel cells into the vans. The joint venture will be based in Villiers-Saint-Frederic, home of Renault’s engineering and development center for light commercial vehicles.