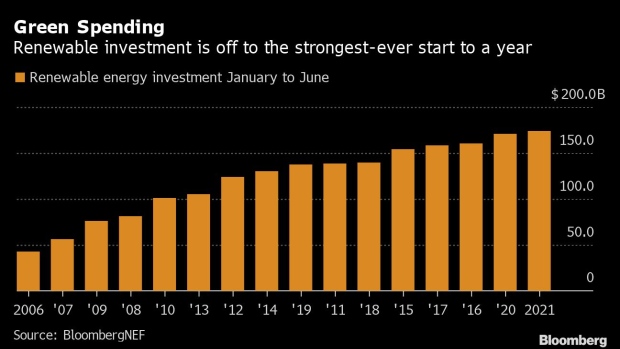 (Bloomberg) -- Investors poured more money than ever into renewable energy in the first half of the year, but the pace is far from enough to sufficiently curb increasing carbon emissions.

As much as $174 billion was spent on solar, offshore wind and other green technologies and companies in the period, according to data from BloombergNEF. While it’s 1.8% more than a year earlier, the level is 7% below the previous six months.

The small increase shows the resilience of the industry leading the fight against climate change despite rising costs because of the surge in commodity prices this year. However, it’s way below what’s needed for nations and companies to reach their targets to limit emissions over the coming decades.

“Renewable energy investment has withstood the effects of the global pandemic, in contrast to other sectors of the energy economy where we have seen unprecedented volatility,” said Albert Cheung, head of analysis at BNEF. “However, a 1.8% year-on-year increase is nothing to write home about. An immediate acceleration in funding is needed if we are to get on track for global net zero.”

The growth was boosted by a record first half for new money raised on public markets, which hit $28.2 billion, up more than fivefold from the same period last year. Commitments to renewable energy companies by venture capital and private equity also rose. Investment in solar projects was up 9% compared to the first half of last year.

However, investment in wind projects fell to $58 billion, down more than 30% compared with the same period last year when developers were rushing to take advantage of expiring support mechanisms in China and the U.S.