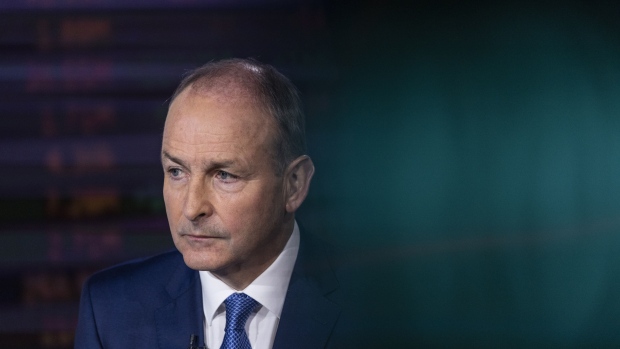 Micheal Martin, Ireland's prime minister, during a Bloomberg Television interview in New York, US, on Thursday, Sept. 22, 2022. Martin said he would like to move faster in the wind industry and double down on renewables. , Bloomberg

(Bloomberg) -- While getting through this winter is the main focus of Europe’s energy crisis, the longer-term fundamental strategy is to “double-down on renewables,” Ireland’s Prime Minister Micheal Martin said.

“There’s a gap now between where we are at in that respect and where we want to get to,” Martin said Thursday in an interview with Bloomberg Television’s Alix Steel and Guy Johnson in New York, where he is attending the United Nations General Assembly. The years to 2026 are “critical” for energy security and supply, he said.

Russia’s war in Ukraine has accelerated the move from fossil fuels to renewables and “technologies and innovations are moving much faster now to deal with that,” Martin said. Even so, “I would like us to move more quickly,” he added.

Ireland aims to generate 80% of its energy from renewable sources by 2030. Only 13.5% came from low-carbon sources in 2020, according to Ireland’s Sustainable Energy Authority.

Offshore wind will be a key area of development for Ireland, which sits in the Atlantic Ocean, Martin said. However, no ports in the Republic of Ireland were ready to be used to construct offshore wind farms, according to a report published by Wind Energy Ireland earlier this week.

“We have challenges in terms of the various processes we have to go through, but on the east coast now we will see significant movement shortly in terms of consensus on that,” he said. “A lot of the legislative capacity has been built into the system now.”