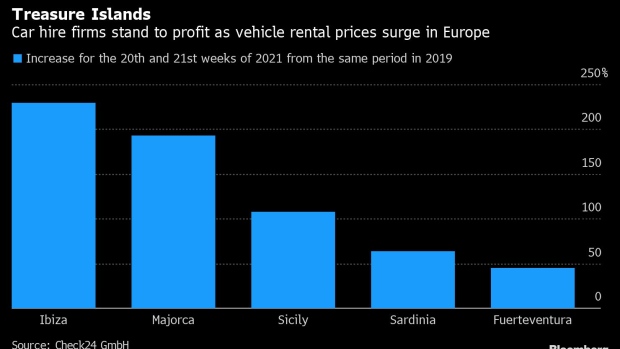 (Bloomberg) -- There’s a fly in the ointment of taking that longed-for vacation as pandemic restrictions finally ease. This summer in Europe, rental cars are blowing the budget.

The soaring cost is particularly acute in Spain and Italy, and most pronounced on the islands of Majorca and Ibiza -- which typically welcome millions of sun-starved Brits and Germans each summer. Rental companies are struggling to restock fleets they drastically shrank last year, as factories for the likes of Volkswagen AG and Renault SA are idled by the global semiconductor shortage.

Car rental rates in Spain jumped by 143% compared with 2019 and 84% in Italy at the end of May, when tourism trips first became possible among a limited number of countries, while prices as much as tripled in Sicily, Majorca and Ibiza, according to comparison site Check24. During peak holiday season, Europcar is offering a no-frills VW Polo for 880 euros ($1,071) at Palma de Mallorca airport for the last week of July -- and availability is dwindling.

“It’s best for people to book as soon as possible for July and August,” Ramon Reus, president of AEVAB, a grouping of local rental companies in the Balearic Islands. “If they wait until the last minute there might not be much left.”

Driving the price spikes is much lower availability of vehicles, just as people start to get moving again. Rental fleets were cut by as much as 40% last year, as companies responded to unprecedented lockdowns and travel restrictions that pushed both Europcar Mobility Group and Hertz Global Holdings Inc. into bankruptcy.

Filling that void is proving tricky during a global semiconductor shortage that’s expected to cost carmakers production of about 3.9 million vehicles this year, according to AlixPartners, a global consulting firm.

At Europcar, which has the biggest share of the rental market in the region, the season is already difficult to manage. Customers navigating volatile pandemic restrictions are reserving last minute and the chip crisis is making new vehicle deliveries unpredictable, said Chief Executive Officer Caroline Parot. She expects shortages between mid-July and mid-August in some places.

To ease the crunch that’s making taxis a cheaper option in some places, Europcar is busy moving vehicles to the Mediterranean coast from more northern countries, something it doesn’t generally do, said Parot. So travelers could see some German-plated cars rented out in Italy or southern France.

The price jump in European vacation hotspots follows a similar trend in the U.S., where holidaymakers in places like Hawaii are also getting squeezed. It’s also been a boon for the shares of Europcar and Hertz as well as Avis Budget Group.

The “golden age” for hire firms may not last, said Morgan Stanley analyst Adam Jonas, as the price rises haven’t been lost on the mobility arm of Stellantis NV, Europe’s second-biggest carmaker.

Stellantis’s Free2Move car-sharing unit, with as many as 300,000 vehicles for rent in Europe, already said it’ll target places where prices are climbing.

“Every summer there is a bit of a crunch at one point but it’s marginal and prices remain steady,” Parot said. “This time, prices are already higher” and “there will be significant increases at some holiday destinations.”