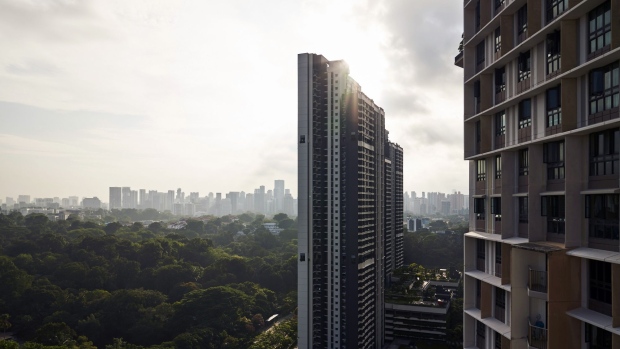 Housing & Development Board (HDB) public housing apartment blocks in Singapore, on Tuesday, April 13, 2021. Singapore’s central bank kept key policy settings unchanged as the city-state sees a brighter economic rebound amid a firming global recovery. The decision was announced at the same time as government data showing gross domestic product in the first quarter grew 0.2% from a year ago, after falling 2.4% in the previous three months. Photographer: Lauryn Ishak/Bloomberg , Bloomberg

(Bloomberg) -- Rents for Singapore’s private apartments and Housing Development Board (HDB) flats rose to record highs last month, according to local media, and expectations are that they will keep rising.

Rents for condominiums rose 2.3% in April to surpass their previous peak reached in January 2013, while rents for HDB flats increased 1.9% to move past the record set in August 2013, local media reported, citing data released by real estate portals 99.co and SRX Property.

The demand for more space during the pandemic coupled with tight supply of houses due to construction delays has led to a surge in rental rates. Observers said they expect the upward trend to continue as the city-state reopens and work relocations increase, including from Hong Kong.

The rental prices for private apartments have risen for 16 straight months, with a 15% year-on-year climb in April. Rents for HDB flats have risen for 22 consecutive months, gaining 14% in the latest month, the reports said.