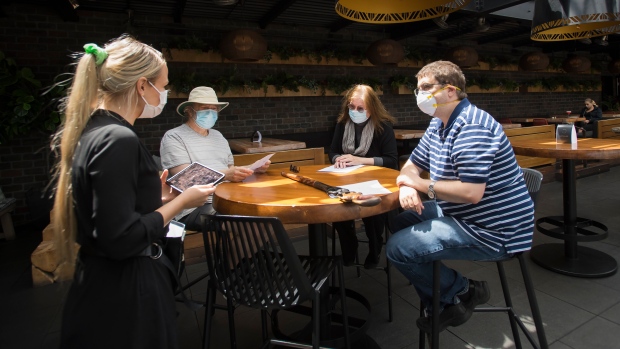 Patrons sit on the patio as waitress Paulina Pasierbek, left, takes orders at Joey Sherway, part of the Joey Restaurant chain during the COVID-19 pandemic in Toronto on Wednesday, June 24, 2020. Toronto and the GTA entered stage two of opening. The Canadian Press/Nathan Denette

Consumer confidence in Canada continues its upward climb for a ninth-straight week amid phased reopenings across the country.

The Bloomberg Nanos Canadian Confidence Index, a weekly composite measure of financial health and economic expectations, increased to 46 last week. That’s up nearly 10 points from early May and is slowly nearing the 50 point mark, above which views are considered net positive.

Rising confidence in Canada coincides with the gradual reopening of Canada’s two largest provinces. Ontario and Quebec accounted for a majority of coronavirus cases in the country and therefore remained shut a longer period.

But earlier this month a flattening of the Covid-19 curve let both provinces to move forward with the next phase of their reopenings, allowing salons, restaurants and malls to resume operations. Quebec has opened even further, now opening all sectors of the economy except festivals, combat sports and sleep-away camps.

The flattening of Canada’s curve stands in contrast to the U.S., where some states are seeing a rise of cases. Texas and Florida, which are both seeing record increases, have reversed some of their reopening plans.

Atlantic Canadian provinces saw the largest jump in confidence last week, rising five points to 53.2. It’s the only region to have a net positive confidence reading. Sentiment in the Prairies, meanwhile, is the lowest at 38.4 as the region is also being hurt by a steep drop in oil prices.

Every week, Nanos Research surveys 250 Canadians for their views on personal finances, job security and their outlook for the economy and real estate prices. Bloomberg publishes four-week rolling averages of the 1,000 responses. The index averaged 57 in the year prior to the crisis.