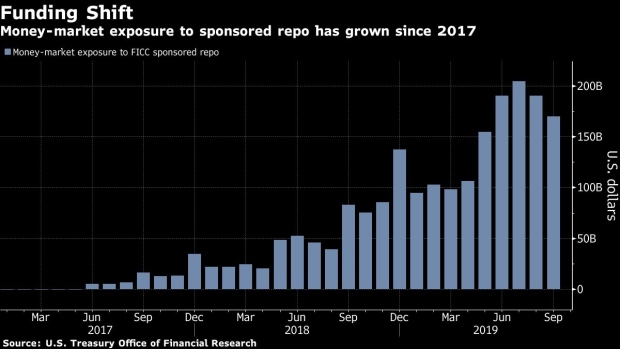 (Bloomberg) -- A funding niche that’s exploded in popularity in the past two years could be adding to instability in U.S. dollar money markets.

The market for repurchase agreements, a key part of the financial system that allows institutions to borrow cash by using Treasuries as collateral, has been in focus since mid-September, when it was at the center of funding upheavals. And one relatively new corner of that market -- sponsored repo -- may be exacerbating strains, according to analysts.

This is in part, Credit Suisse Group AG analyst Zoltan Pozsar says, because it’s concentrating funding risk in overnight transactions rather than longer-term ones. And while this may all seem arcane, September’s disruptions in the broader repurchase-agreement market -- of which sponsored repo is just one part -- show what can happen when things go awry in overnight funding.

Sponsored repo essentially allows banks to provide cash to counterparties -- like money-market funds and hedge funds -- without bumping up against constraints on their own balance sheets that have been imposed by regulation.

The mechanism, which takes place on the Fixed Income Clearing Corp.’s repo platform, allows banks to guarantee the completion of their clients’ trades and assume the credit risk. But it also enables them to offset trades against one another, reducing the burden on their balance sheets.

Factors such as increased Treasury supply, corporate tax payments and stricter bank regulation have all been fingered as culprits behind the recent turmoil that forced the Federal Reserve to step in and calm markets. Yet an expanded reliance on overnight markets may also be at work.

Markets have increasingly leaned on shorter-term funding rather than longer-term sources, Pozsar said in a podcast that’s set to be released on the Bloomberg terminal later on Friday. And part of that is down to the immense growth seen in sponsored repo, which only offers money on an overnight basis.

Michael Bird, a senior portfolio manager at Wells Fargo Asset Management, said at a conference in June that FICC-sponsored repo accounts for more of the firm’s repo transactions than any other counterparty.

With the federal government’s budget deficit fueling an increase in Treasury supply even as foreign demand for U.S. debt wanes, the amount of collateral to be financed through repo transactions has also risen. This additional collateral has, for the most part, been funded in the sponsored section of the market, according to Pozsar. And given that this is purely an overnight market, that creates a potential pinch-point.

“That’s a dangerous situation,” said Pozsar. “If the money doesn’t come in and it goes out -- maybe there’s a large settlement day, there’s a large tax payment day -- when the money goes away you literally hit an air pocket. And if there’s no one to lend into that air pocket, you have a problem.”

This growth may have played a role in the increasing fragility of the overnight funding market, Barclays strategists wrote in a Nov. 7 note to clients.

Analysts including Jeffrey Meli and Joseph Abate mentioned encouraging central clearing in repo as one of 10 potential approaches to address broader structural issues. This is because the growth in sponsorship would expand the scope for banks to net out the effects on their balance sheets and reduce costs for intermediaries.

Still, Barclays cautioned that pushing more activity into clearing markets could create risks since there are only a handful of sponsoring institutions.

Money-market cash invested in sponsored repo reached around $170 billion at the end of September, according to Office of Financial Research data. While that’s down from a peak of more than $204 billion in July, that’s substantially above the $5 billion level it was at in June 2017.

With market participants digesting the lessons of September’s ructions, there’s a possibility that this more recent pullback in sponsored repo usage could continue. According to Wrightson ICAP economist Lou Crandall, the September turmoil taught market participants that there was a complacency about leveraged investors’ ability to carry “ever-growing volumes of Treasury positions with very short-term financing.”

On the flipside, the amount of repo financing provided by dealers for 30 days or longer climbed early last month to a record $549 billion, according to data from the Federal Reserve Bank of New York, and it remains relatively elevated.

Regardless of what role sponsored repo may play, what’s clear is that money-market participants remain concerned about the potential for more turmoil even though the Fed’s actions -- including both repo operations and Treasury-bill buying -- have calmed the situation for now.

“There is a very real chance that, if we don’t have a better set of pipes from the Fed and a more aggressive QE, then you have a very, very problematic year-end turn,” Pozsar said.