Spike in repo market could be the cause of something more serious: Fixed income specialist

Flare-ups in the repo market could still cause worries across the global banking system, more than two months after chaos subsided in this vital corner of finance.

Of particular concern: U.S. Treasuries, the world’s biggest bond market and the place where the federal government funds its escalating deficit. If repo rates become jumpy again — and many are girding for that to happen in the middle and end of this month — some of those leveraged investors may have to unwind Treasury holdings, potentially increasing the U.S. government’s interest costs at a time of record borrowing.

“If repos were much harder to get at reasonable rates, Treasury prices would drop,” said Darrell Duffie, a Stanford University finance professor who’s co-authored research on repo with Federal Reserve staffers. “The cost to taxpayers for funding the national debt would therefore rise.”

Mid-December will see a recurrence of the same circumstances that apparently led to the September eruption -- quarterly corporate tax payments that drained cash from the banking system, coupled with Treasury settlements that prompted a rush for scarce reserves. Also, many analysts believe banks, particularly those based in Europe, will retreat around New Year’s Eve from the repo market, driving up rates by pulling cash from the system as others try to secure financing. European banks face slightly different capital rules, encouraging them to reduce their end-of-year footprint and the amount of equity financing they need to back up their assets. 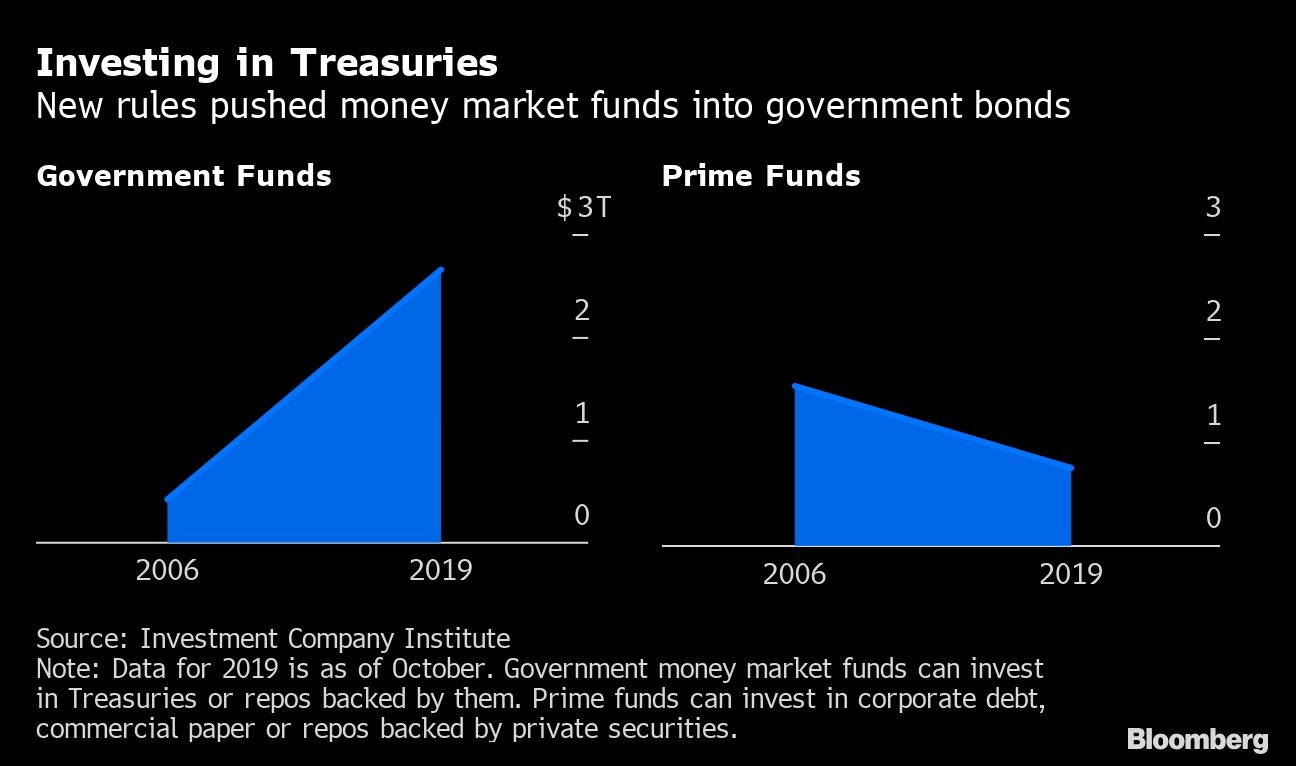 While the Fed has taken steps to bring order back to repo, adding liquidity by buying Treasury bills and doing overnight repo operations, many fret that won’t be enough to keep rates under control. For those still scarred by the financial crisis a decade ago, the spike in repo rates in September triggered painful memories of the credit contagion in 2008 that took down some of the largest U.S. banks. The risk has since shifted to hedge funds and independent broker-dealers, the primary users of short-term repos used to finance positions in U.S. government debt.

The repo market has changed significantly from September 2008, when nervous investors decided not to roll over overnight funding for Lehman Brothers Holdings Inc., causing the investment bank to collapse. Lehman was overly reliant on repo for its funding needs, and had too many assets tied to securitized subprime mortgages that had plunged in value as the U.S. housing market collapsed.

Today, big banks have lots of other funding sources — more in deposits, in particular, than they had before the crisis. Repos — or repurchase agreements, transactions that amount to collateralized short-term loans often made overnight — are no longer a crucial source of funding for the biggest Wall Street firms, which are now net lenders in the market.

“As banks got smaller in the repo market, non-bank dealers like us filled the void,” said Scott Skyrm, executive vice president of Curvature Securities LLC. “We absorbed what used to go to the banks, and it’s all divvied up among lots of small firms. Banks are still active, but they’re not as big as they used to be.”

Instead of helping to fund esoteric structured products, repos now overwhelmingly finance Treasury holdings. So even if some of the weakest investors were to blow up, the contagion would be small because lenders can seize Treasuries backing the loans to cover losses.

While most smaller broker-dealers only intermediate between borrowers and lenders, a few also take positions with some of the money they borrow. Such proprietary trading was big for Lehman and other big Wall Street firms before being restricted under the Volcker Rule.

Independent dealers such as Ronin Capital LLC and Aardvark Securities LLC, both based in Chicago, are allowed to take proprietary risks because they aren’t part of banking groups. Neither firm responded to emails and phone calls seeking comment.

Hedge funds and broker-dealers aren’t the only buyers of U.S. government debt, of course. There are also cash buyers, such as mutual funds, foreign central banks and sovereign wealth funds, who buy the Treasuries with money they have, without any need to borrow. But leveraged buyers have gained importance as others slowed their purchases.

As U.S. government debt rose by US$1 trillion in the 12 months through March, more than 80 per cent of it was absorbed by “other investors,” a category in the U.S. Treasury Department’s latest available database that includes broker-dealers and hedge funds. In the same period, holdings by primary dealers — mostly the biggest banks’ broker-dealer units — increased by only about US$100 billion.

Repo funding rose by at least US$400 billion in the same period, New York Fed data show, a sign that the debt increase was taken up mostly by leveraged investors like hedge funds. Since March, the debt has risen by almost US$1 trillion more. And, in the past two years, the rising supply coupled with shrinking demand from foreign buyers has forced primary dealers to increase their Treasury holdings, which they typically finance through the repo market as well.

“If it becomes a negative-carry trade due to constant spikes in funding rates, hedge funds and other leveraged investors won’t continue buying Treasuries,” said Peter Nowicki, head of the repo desk at Wedbush Securities Inc., a broker-dealer active in the market. “Meanwhile the magnitude of supply has been breathtaking. Can the plumbing absorb it?”

The weak demand for government bonds sold a few days after the September spikes shows the ultimate pain a troubled repo market can cause, Nowicki said. Even if cash investors picked up the slack, the weaker demand from repo-funded buyers could increase yields, even if not by huge amounts, according to Curvature’s Skyrm.

Banks, both before the crisis and now, serve as intermediaries between cash investors — money-market funds, corporations, insurance companies and municipalities who want to lend their extra cash for a better return — and short-term borrowers like hedge funds, real estate investment trusts and smaller broker-dealers who finance holdings of longer-term securities.

Recent turmoil aside, post-crisis regulations have tamed the repo market. Banks’ capital requirements increased, with repos no longer exempt from those calculations. The largest banks face surcharges for relying too much on short-term funding, and money-market funds — the biggest suppliers of cash — are no longer allowed to have fixed valuations if they invest in anything other than Treasuries or repos backed by them.

Stronger internal controls — a post-crisis phenomenon that accompanied stricter rules and supervision — also make the big banks more aware of how much risk their leveraged clients are taking with borrowed money, even if they’re the middle men. Hedge funds’ positions in the Treasury market using repos are constantly monitored by their prime-brokerage contacts at the big banks, who can then force the funds to exit their positions if and when losses mount, fund managers say.

That will limit systemic risk, bank executives and regulators say. But even if the risk isn’t significant, the Fed will pull all the stops to prevent future hiccups, said Glenn Havlicek, co-founder of GLMX LLC, which provides technology services to market players.

“The repo market is the oil in the wheels of the Treasury market,” Havlicek said.

--With assistance from Nick Baker.