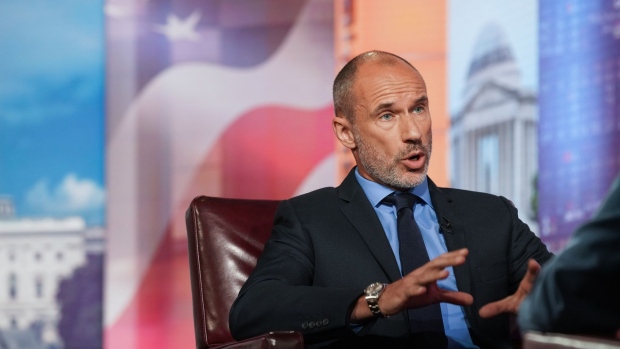 Workers remove steel panels for Rivian electric vehicle (EV) trucks from a hydraulic press at the company's manufacturing facility in Normal, Illinois, US., on Monday, April 11, 2022. Rivian Automotive Inc. produced 2,553 vehicles in the first quarter as the maker of plug-in trucks contended with a snarled supply chain and pandemic challenges. , Bloomberg

With ESG increasingly in the crosshairs of Republican politicians—be it over the strategy’s efforts to address climate change or the lack of diversity in C-suites—one beneficiary of sustainable investing that the attacks seem to have overlooked is the American worker.

The “S” in ESG includes worker issues ranging from compensation to health and safety. While global warming often takes center stage when it comes to environmental, social and governance investing, the majority of Americans say paying workers a fair, living wage should be the top focus of the biggest US companies, according to a recent survey by JUST Capital, a nonprofit research group.Job creation, worker health, safety and training ranked among the top six priorities out of 20 stakeholder issues. Addressing human rights in supply chains was ninth, while combating global warming ranked 13th in the annual survey.

“The divisiveness of political messages, both on the left and right, is out of touch with what Americans really want,” said Martin Whittaker, chief executive of JUST Capital. “Workers are an issue where people across political divides are united.”

Republican governors including Florida’s Ron DeSantis have targeted ESG, describing the investing approach as “ideological.” More than a dozen Democratic-controlled states have hit back, saying it’s the ESG attacks that are politically motivated, adding that the GOP campaign will ultimately end up costing taxpayers.

“The blacklisting states apparently believe, despite ample evidence and scientific consensus to the contrary, that poor working conditions, unfair compensation, discrimination and harassment, and even poor governance practices don’t represent material threats to the companies in which they invest,” according to the nonprofit For the Long Term, which works with state treasurers and comptrollers.

There are signs investment firms are taking notice of worker issues, too:

“Workers affected by decarbonization will need to be retained, retrained, redeployed and/or compensated,” Kimberly Stokes, Calvert’s corporate engagement strategist, said in an April blog post. If societal impacts and the shift to cleaner fuels are instead pitted against each other, it will be difficult to reduce emissions, she said.

Lazard Asset Management said it has worked with a team at the Massachusetts Institute of Technology to create a “Living Wage Calculator” to examine wage issues at a discount retailer. Assessing worker-related issues is relevant to the long-term financial productivity of businesses, said Nikita Singhal, co-head of sustainable investment and ESG at Lazard.

“This is not about virtue signaling or a political view, but rather an investment hypothesis that businesses that have sound human capital management practices, especially in human capital intensive industries, will outperform their peers all else equal,” she said.

The plight of American workers has become all the more poignant amid surging energy costs, inflation and the possibility of terminations as a potential recession looms. Since Donald Trump won the 2016 presidential election with votes from blue-collar workers, Republicans attacking ESG may wish to take these issues into consideration. JUST Capital’s Whittaker says there’s more to be done. While ESG investors have sought to address workforce issues—especially during the early stages of the pandemic—he advises they should put greater emphasis on that part of their strategy.

“They need to up their game,” he said.