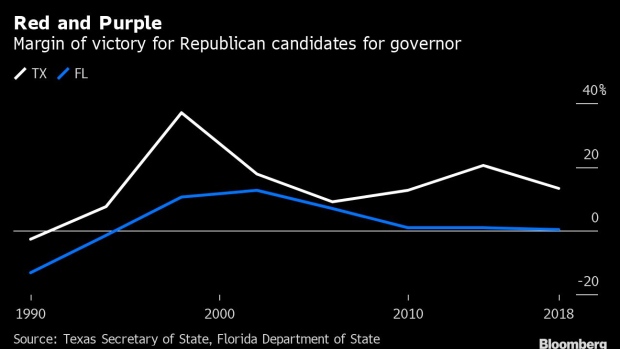 (Bloomberg) -- It only took a few hours for Florida Governor Ron DeSantis to deliver his rejoinder this week to Texas Governor Greg Abbott. On Monday evening, Abbott had used his executive powers to ban employers from mandating Covid-19 shots, and half a day later, DeSantis was floating new legislation to effectively do the same.

It’s a tit-for-tat that’s been playing out for months between the best-known Republican governors in the U.S. -- and potential presidential candidates in 2024. Abbott and DeSantis, both lawyers by trade, have followed similar political playbooks over the past few years when it comes to showing their conservative bona fides, from banning mask mandates in schools, to calling for harsh clamp-downs on undocumented immigrants.

The rivalry shows how Republicans in two of the biggest states are under pressure to pursue the types of populist efforts that would please Donald Trump and his loyalists, even at the risk of alienating moderates and businesses worried about recruiting candidates turned off by restrictive social policies. Hard-line approaches like curtailing school rules aimed at coronavirus safety are losers in polls, but rules framed as expanding “freedom” serve as an extension of Trump’s fire-up-the-base strategy. Far from turning the page on Trump’s GOP, both men are trying to out-Trump one another.

“In many ways, they are frenemies,” said Aubrey Jewett, a political science professor at the University of Central Florida. The two share many policy priorities, but “on the other hand, they both are smart enough to realize that they may be trying to reach the same goal.”

Texas and Florida saw a surge in interest during the pandemic as white-collar workers realized they could do their jobs from anywhere. Relatively high-paying jobs in tech migrated to Austin, while some financial firms set up headquarters or new satellite offices in Florida.

Early signs show that state culture wars and public health decisions may have turned off some large, image-conscious corporations even as certain hedge funds and tech investors specifically seek out the states because of their Republican political leadership, lower taxes and less regulation. Throughout the pandemic, Florida and Texas have been held out as the anti-California and New York, where governments instituted some of the strictest Covid-19 mitigation measures anywhere.

For now, DeSantis may be coming out ahead in the quest to establish his credentials nationally, already sitting atop some early polls for the Republican spot on the 2024 presidential ballot assuming Trump doesn’t run. The 43-year-old former U.S. congressman has experienced a swift rise since he landed Trump’s endorsement in the 2018 GOP primary for Florida governor, which he parlayed into a surprise victory in America’s largest swing state. He’s been broadly aligned with Trump ever since.

That said, Trump has made clear he wouldn’t defer to DeSantis come election time. The former president said in a recent interview with Yahoo! Finance that should he decide to run in 2024, DeSantis wouldn’t challenge him.

“I think he would drop out,” Trump said. “And if I faced him, I’d beat him like I would beat everyone else, frankly.”

Abbott, a 63-year-old former state supreme court judge and attorney general seeking a third term as governor, has had a longer career in politics and isn’t beholden to the former president in the same way, according to Jewett. He was seen as slower at reopening his state after the initial wave of Covid, allowing DeSantis to seize the anti-lockdown narrative and become the de facto spokesman against shutdowns on Fox News.

DeSantis’s political action committee had raised more money than Abbott’s through the first six months of the year -- $36.2 million to $20.9 million -- and did so from a large pool of out-of-state donors, led by Citadel’s Kenneth Griffin, who gave $5 million. Abbott got more than 90% of his money in-state, from rich donors like thoroughbred horse breeder Kenny Troutt and cattle ranchers Michael and Mary Porter. DeSantis also traveled the U.S., giving presidential-sounding speeches about key GOP talking points in places like New Jersey and Nebraska.

Both governors are up for re-election in 2022, but face different electoral dynamics. Neither state has picked a Democrat for their top post since the early 1990s, but the margins of Republican victories have been much wider in Texas, meaning the primary vote there might be Abbott’s biggest threat next year. DeSantis isn’t expected to face any serious primary challenge.

Abbott, on the other hand, has had to defend himself from two conservatives trying to outflank him on the right ahead of the March primary -- former state Senator Don Huffines and Allen West, an ex-Florida congressman who also served a contentions stint as head of the Texas GOP during which he frequently criticized the governor.

Huffines has harangued Abbott for failing to be like DeSantis, especially when it comes to reopening the economy during the pandemic.

“Greg Abbott isn’t a leader, he’s a follower,” Huffines said in an emailed response to questions. “He decided he would follow Ron DeSantis’s rhetoric but would never put in the record to back it up.”

While DeSantis doesn’t face the same primary challenge, he has shown no sign of moderating his tone to compete for the ideological center in what will probably be a tight general election.

The two leaders have shared the same political stage at times. In July, DeSantis joined Abbott at the Mexican border in Texas, offering pledges to send Florida cops to fight illegal immigration.

DeSantis spokeswoman Christina Pushaw said the governor is “completely focused” on his current job, and she cited remarks from Sept. 7 in which he called the presidential chatter “nonsense.”

A spokeswoman for Abbott didn’t address questions about his relationship with DeSantis. Abbott is focused on “securing our southern border, ensuring the integrity of our elections, protecting the lives of the unborn, and building a brighter future for all Texans,” the press office said in an email.

Mark Jones, a political science professor at Rice University in Houston, said Abbott and DeSantis have emerged as natural leaders of the Republican Party as it figures out a direction to take after Trump’s presidency.

“They’re definitely in sync with each other, as makes sense because they are far and away the two most prominent Republican governors in the country,” Jones said.