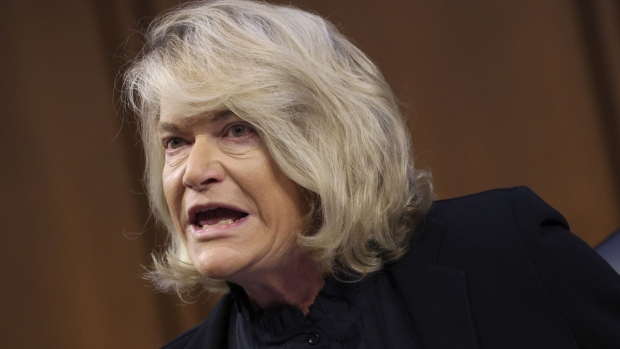 (Bloomberg) -- A Republican senator urged her colleagues to scrutinize the role played by President Joe Biden’s nominee to be Federal Reserve vice chair for supervision when she was a director of a financial-technology company that subsequently gained access to the central bank’s payments system.

Wyoming Republican Cynthia Lummis, during a confirmation hearing before the Senate Banking Committee Thursday, confronted Sarah Bloom Raskin over what she’d done on behalf of fintech firm Reserve Trust when she was on its board of directors between 2017 and 2019.

Lummis questioned whether Raskin had used her influence to help Reserve Trust gain a master account at the Fed -- a vital step that any financial institution needs to gain access to the Fed’s payment system -- and that she called the Kansas City Fed in August 2017 in regard to the application. The company is based in Colorado, which lies in the regional Fed bank’s district.

Raskin didn’t answer the questions in detail but did say she followed all the rules.

“I want to make very clear that I have, first of all, had the honor to serve in various public capacities and each time I left I have been very mindful of the rules regarding departure,” Raskin said.