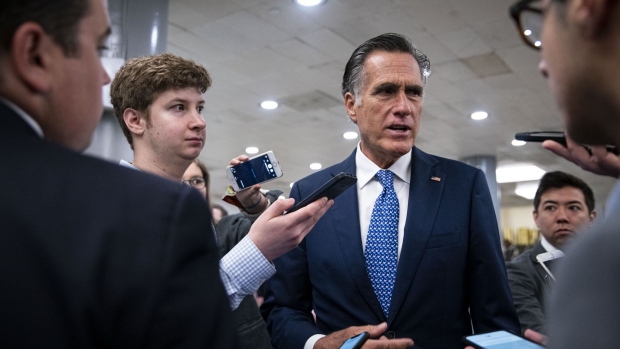 Senator Mitt Romney, a Republican from Utah, speaks to members of the media while arriving for a vote in the U.S. Capitol in Washington, D.C., U.S., on Tuesday, June 8, 2021. Democratic congressional leaders face a narrowing path to move forward on President Joe Biden's $4 trillion economic agenda without Republican support as negotiations with the GOP are at risk of stalling. , Bloomberg

(Bloomberg) -- The handful of Republican senators working on a bipartisan infrastructure deal said Tuesday they’re optimistic they can drum up expanded GOP support for their $579 billion draft plan.

Rob Portman, who is co-leading the bipartisan talks with Arizona’s Kyrsten Sinema, agreed with that assessment.

It remains unclear whether all 50 members of the Senate Democratic caucus would back the bipartisan deal, which constitutes a fraction of President Joe Biden’s $4 trillion economic agenda and which lacks his tax hikes on companies and the wealthy. Any dissents, and the plan would need more than the bare minimum of 10 Republicans to clear the 60-vote threshold needed to advance most legislation in the Senate.

Portman gave new details of the emerging agreement, the text of which still has not been released publicly. He said the group is proposing $63 billion in new net revenue from enhanced tax enforcement, generated through $40 billion in extra IRS funding. That amount uses a Congressional Budget Office estimate, rather than a White House projection of $700 billion in revenue from $80 billion more for the IRS.

Portman also said that a significant amount of Covid-19 relief funds -- including money states are not spending on expanded unemployment benefits -- would be repurposed for infrastructure, he said.

Such repurposed funds exceed $100 billion, Portman said, while stopping short of giving an exact figure. The group has already said it expects to net at least $35 billion in funds from indexing the national gas tax to inflation.

Some $315 billion in funding will come from incentives for public-private partnerships, according to a person familiar with the plan.

Romney and Portman expect to release the text of the deal within days, but Portman said there is “no arbitrary” deadline to do a deal.

Moderate Republicans emerging from the lunch said they were supportive of the effort, even if they were not ready to formally back the plan yet.

“The top lines look good” said North Carolina’s Thom Tillis. “I think it has a lot of merit.”

Minority Leader Mitch McConnell said he is still in “listening” mode on the deal.

“I would like to see us get an outcome on infrastructure. It’s important, the country needs it. We have a history of doing infrastructure on a bipartisan basis,” McConnell told reporters. “Put me down as listening and hopeful that somehow, some way, we’ll be able to move forward with an infrastructure bill.”

The emerging deal has just $10 billion for electric vehicle charging stations, according to a GOP senator. That is far short of the myriad of climate change-related provisions that progressive want to see.

“We are saying that it has to match the scope and the scale of the problem,” said Senator Ed Markey, a Massachusetts Democrat. He said that to accomplish that, a budget reconciliation bill will have to be passed.

Majority leader Chuck Schumer is already moving to advance what would be a second sweeping bill through the partisan budget process -- after the $1.9 trillion pandemic-relief package enacted in March -- whether or not bipartisan talks succeed. He said he will meet tomorrow with Democrats on the Budget Committee who are writing the legislative outline needed to move to the reconciliation process.

Schumer plans to urge the Democrats on that committee to write a unity budget that can quickly be accepted by all 50 members of the caucus in July.

According to a person familiar with his thinking, Schumer will urge that a resolution fund investments to reduce electricity emissions by 80% by 2030 and provide funding for clean car rebates and for U.S. manufacturers and farmers to curb greenhouse gas emissions. He also will instruct them to include President Joe Biden’s American Families plan including investments in childcare and education.