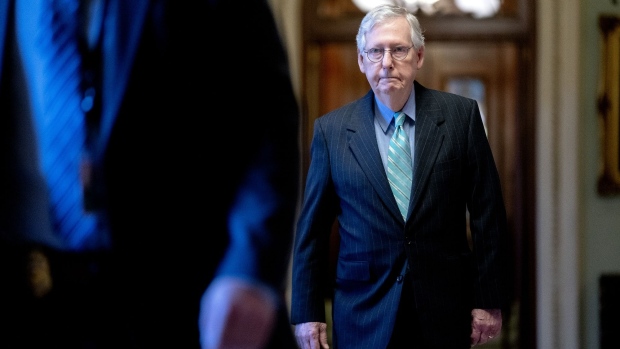 The U.S. Capitol in Washington, D.C., U.S., on Wednesday, Oct. 6, 2021. Democrats and Republicans must decide in the next day or two how far to take their deadlock over the U.S. debt limit, which is pushing the country perilously close to a catastrophic default. Photographer: Stefani Reynolds/Bloomberg , Bloomberg

(Bloomberg) -- Senate Republicans blocked an overhaul of U.S. election laws from reaching the floor for debate, adding to a string of Democratic defeats on key 2020 campaign pledges that is straining ties with civil rights groups, minority voters and other key constituencies in the party.

The bill failed to advance Wednesday on a 49-51 vote, well short of the 60 needed to overcome a filibuster, highlighting Democrats’ meager power in a chamber evenly split between the two political parties and leaving the legislation all but dead. Senate Majority Leader Chuck Schumer changed his vote to “no” so he can bring the bill up later.

Republicans’ rejection of the bill is “an implicit endorsement” of the “public subversion laws” of some states, Schumer said after the vote.

“Why aren’t my colleagues outraged by these laws?” he added.

Democratic leaders have conceded they don’t have the votes now to alter the Senate’s filibuster rule and pass it on their own.

The legislation is designed to counter a record number of new voting restrictions emerging from Republican-led state legislatures, which Democrats say aim to curtail participation by minorities and poorer Americans. The bill, The Freedom to Vote Act, was an attempt at a compromise among Democrats, after a much broader voter access bill was blocked by Republicans in June and again in August.

“If there’s anything worthy of the Senate’s attention, if there’s any issue that merits debate on this floor, it’s protecting our democracy from the forces that are trying to unravel it from the inside out,” Schumer said.

“For multiple years running, Washington Democrats have offered a rotating merry-go-round of rationales to explain why they need to federalize voting laws and take over all of American elections themselves,” McConnell said.

Wednesday’s vote came after other setbacks to President Joe Biden’s agenda. Bipartisan talks failed to produce new legislation related to gun control, immigration and policing practices. Democrats have tried unsuccessfully to attach a plan to provide a pathway to citizenship to millions of undocumented immigrants in a multitrillion-dollar economic package they aim to pass on their own, although a more limited approach providing deportation protections is being weighed by the Senate parliamentarian.

The defeats place added pressure on Democrats to produce on Biden’s  economic agenda. Schumer said Tuesday that congressional leaders are pushing for a “framework” by the end of the week on a package of tax increases and programs to fight climate change and expand federal funding for education, child care and health care. That would clear the way to advance that plan as well as the Senate-passed $550 billion public works bill awaiting action in the House.

The voting rights bill was drafted by a group of Democrats that included moderate Senator Joe Manchin of West Virginia, who said the earlier version lacked bipartisan support and was too expansive. The agreement united all Senate Democrats behind the same proposal for the first time.

The measure would create an automatic voter registration system through each state’s motor vehicle agency, make Election Day a public holiday and provide voters with at least 15 days of early voting for federal elections. It also is designed to curtail partisan “gerrymandering” of congressional districts and would put in place new campaign finance disclosure requirements that include mandating Super-PACs and other outside groups report their donors.

Among other changes from the earlier version, it includes a voter ID provision Manchin wanted. It lets voters use a number of types of identification cards and documents, which can be either hard copies or in digital form.

Senator Dick Durbin of Illinois, the No. 2 Democratic leader, told reporters this week that the next step on voting rights legislation isn’t clear. He said there aren’t enough votes to change the filibuster rule, and at best Democrats may try to build consensus around reforming the way it works, like requiring senators utilizing it to be present and speaking. Now, he said, a senator can declare a filibuster and “go home for the weekend.”

“People who want to stop the business of the Senate should have to bear that burden personally when they’re speaking on the floor,” Durbin said. “And as a group if there are 40 of them that feel that way, they should be here.”

(Adds Schumer in fourth and fifth paragraphs. An earlier version of this story corrected the vote tally in second paragraph)