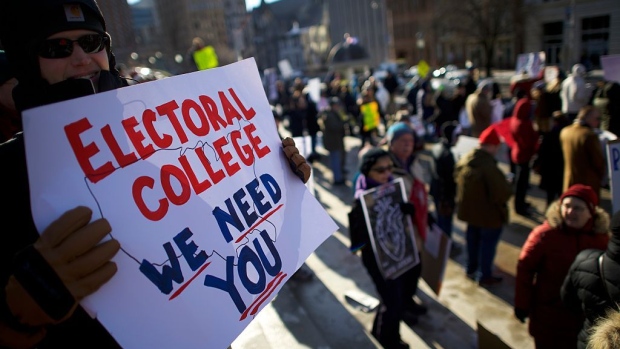 (Bloomberg Opinion) -- Several states are still counting ballots, but the best estimates right now suggest that when all is said and done, President-elect Joe Biden will have defeated President Donald Trump by about 4.5 percentage points nationwide. That’s a pretty large margin — bigger than the popular-vote victories by Hillary Clinton in 2016, Barack Obama in 2012, George W. Bush in 2004 or Al Gore in 2000. It’s also bigger than the margins in 1976, 1968, 1960 and perhaps 1948.

And yet Biden needed all of it. To understand why, think about the electoral college arithmetic. Biden won Wisconsin by just 0.6 percentage points. That means that if there had been a uniform nationwide shift to Trump of 0.6 percentage points (plus one vote), Trump would have captured Wisconsin, Georgia and Arizona, which would have produced an electoral-college tie of 269 each, sending the election to the House of Representatives. Trump would have won there even though Democrats are in control because Republicans have majorities in most state congressional delegations, each of which would get one vote. Subtract that 0.6 from Biden’s popular-vote margin and the result is about a 3.9-percentage-point electoral college bias favoring Republicans in 2020.

That’s higher than in 2016, when the Republican advantage was about 2.9 percentage points and turned Clinton’s 2.1-percentage-point popular-vote win into a 304-to-227 electoral-college loss.

So it’s not exactly surprising that many Democrats have concluded that the last two elections prove that the electoral college is structurally biased against them. But it’s not necessarily so.

There’s evidence that 2016 and 2020 may turn out to be flukes, and the nation will return to what had been the case before those two elections — an electoral college with smaller biases that fluctuate between (slightly) helping Democrats and Republicans.

Despite being larger, the Republican advantage was actually less robust in 2020 than in 2016. That’s because a national popular-vote tie — assuming uniform swing — would have produced 320 electoral votes for the GOP in 2016, but only 311 in 2020. Minnesota, which had shifted sharply to Republicans in 2016, shifted back this year, and New Hampshire, which has been very close in most elections, moved more solidly to the Democrats. Only one state, Nevada, moved the other way, going from just slightly more Democratic than the nation to a bit more Republican.

Moreover, the continuing trend in Arizona and Georgia toward the Democrats may solve a good deal of the bias problem. Both states were still more Republican than the nation in 2020, given Biden’s tiny wins compared to his larger national advantage. But both also have been shifting. In 2008, Georgia was 12.5 and Arizona 15.8 percentage points more Republican than the nation. Those numbers have steadily dropped in the last three election cycles, and are now down to about 4.2 percentage points each. There’s no guarantee that the trend will continue apace, but if it does, the Republican electoral-college advantage might disappear in 2024.

The broader point is that electoral-college bias, unlike the tilt in the Senate giving disproportionate power to small states, isn’t a built-in structural issue. It’s based instead on what appear to be random fluctuations in the partisan loyalties of the states.

Political scientists like to say that votes are used “efficiently” by political parties if they are spread around so that they yield the largest possible number of statewide victories. By contrast, votes are seen as “wasted” if they produce wide leads, since the electoral college rewards winning a state by a single vote exactly the same way that it counts winning by millions.

The problem for Democrats is that they’ve opened up a very large, wasted lead in California while coming closer in Republican Texas and, increasingly, Republican Florida. Add in New York, and in 2000 Democrats had a 1.6-million-vote lead in the largest four states. In 2016, that lead was 5.1 million, but actually yielded the Democrats smaller electoral-vote advantages (87 to 57 in 2000; 84 to 67 in 2016).

The final numbers for 2020 aren’t tallied yet, but it appears that Democrats will have wasted even more votes this time. The point is that there’s nothing necessarily permanent or structural about this. Yes, mathematically, there’s a small bonus for Republican Wyoming and Montana (and Democratic Vermont and Delaware) in the electoral college, but that’s not the source of the Republican advantage. Indeed, in 1976, when Democrat Jimmy Carter won a slim popular-vote  victory but a solid electoral-college win, Gerald Ford, the Republican incumbent, actually won 10 of the 14 states with 3 or 4 electoral votes. This year, Joe Biden won half of what is now 12 states with 3 or 4 electoral votes. No, what’s hurting Democrats is winning very large majorities in some large states while losing tighter contests in others.

And it’s certainly possible that will change. California still has 2020 votes remaining to count, but as of now, Biden’s percentage-point lead over Trump is actually a bit smaller than Clinton’s was four years ago. Even if that doesn’t hold up, it’s likely that California shifted a bit to the Republicans relative to the nation as a whole, though Biden’s vote margin there is larger thanks to higher turnout. The 15 closest states appear to have shifted a bit more to Biden than uncontested states. And Texas still leans strongly to Republicans, but the shift toward competitive territory seems to be real.

To be sure: The Republican advantage could get larger. Texas, Florida and Ohio could all spend years as lean-Republican states that deliver a whole lot of electoral votes to Republicans very efficiently, while Democrats capture larger and larger majorities in the states they already win. If that’s the case, what’s always been a curiosity and what has recently become a problem — the potential gap between what people want and what the electoral college delivers — could become a massive obstacle to American democracy.

But overcoming that gap doesn’t require Democrats to overcome any built-in disadvantage. The electoral bias that’s opened up recently isn’t structural; it’s the result of a bunch of small fluctuations, some of them really more a result of chance than planning, that the parties themselves can work to make larger or smaller.