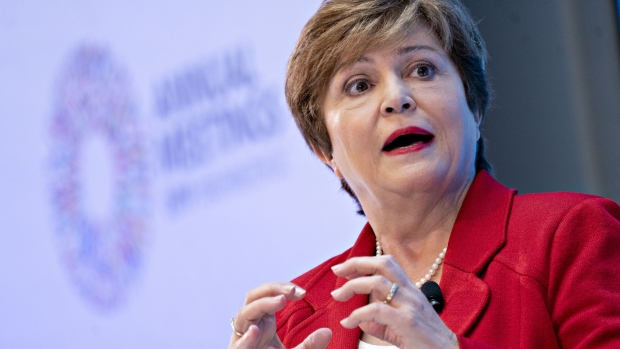 Kristalina Georgieva, managing director of the International Monetary Fund (IMF), speaks during a discussion ahead of the IMF and World Bank Group Annual Meetings in Washington, D.C., U.S., on Tuesday, Oct. 8, 2019. Georgieva, in her first major address as head of the IMF, painted a downbeat picture of the world economy and said a more severe slowdown could require governments to coordinate fiscal-stimulus measures. , Bloomberg

(Bloomberg) -- Republican lawmakers blasted the chief of the International Monetary Fund on Friday after a report that she pressured staff of the World Bank, when she was working at that institution, to boost China’s position in a ranking of global economies.

Senator Bill Hagerty of Tennessee called on the U.S. to “demand accountability,” saying that Kristalina Georgieva “masterminded a corrupt scheme” to manipulate the World Bank’s Doing Business report. Georgieva has denied any wrongdoing, saying that she disagrees “fundamentally” with the findings of the report that was commissioned by the World Bank board.

“We need a full investigation into this shocking pay-to-play scheme and a restoration of this valuable report under conditions we can trust rather than its cancellation,” Hagerty said after the World Bank announced plans to discontinue the Doing Business rankings. “Multilateralism cannot mean just doing whatever is necessary to get more money from Communist China.”

“No one should be surprised that the Chinese Communist Party uses its influence to corrupt individuals and institutions,” said Senator Marco Rubio of Florida, a member of the Foreign Relations committee. “It is in the CCP’s organizational DNA to do so. Those complicit should be held accountable, and free nations need to seriously reevaluate the role we allow Beijing to play in global institutions.”

U.S. Representative French Hill, an Arkansas Republican and one of the most outspoken Congressional critics of last month’s IMF reserves issuance, said the report raises serious questions about Georgieva’s motivations during her time at the World Bank.

“If these allegations are true, then the IMF board should promptly assess her service in the top job there,” he said.

Hill, a member of the House Financial Services Committee, said that he would ask U.S. Treasury Secretary Janet Yellen to evaluate the report and bring that opinion to Congress.

“Financial markets and policy makers rely on the expertise of the multilateral lenders and that reputation is now tarnished,” he said.