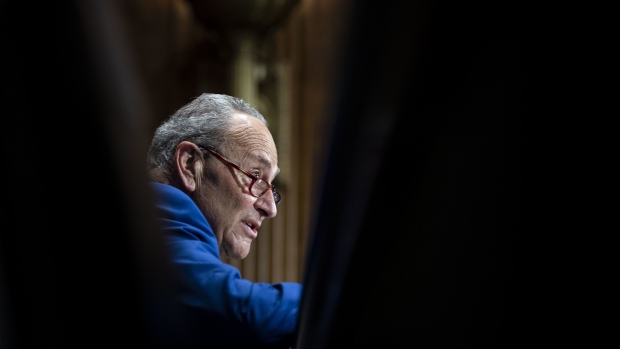 Schumer’s decision to force an early test vote Wednesday afternoon spurred a faster pace in protracted talks for a $579 billion infrastructure plan, but not the completed deal GOP senators are demanding as a prerequisite to begin debate.

If the vote to move forward on the Senate floor fails to get the 60 votes needed, as expected, talks among a bipartisan group of 22 senators could continue, at least a few more days. Schumer could use a procedural maneuver to try again.

But Jon Tester, a Montana Democrat, expressed optimism on Tuesday night: “I really believe tomorrow it will be done. We are so close.” A fellow Democrat, Mark Warner of Virginia, said he was confident that a final deal would be forged.

“We know all the issues, we’re digging deep on things like pay-fors, and we wouldn’t be continuing this effort if we didn’t think we were going to get there,” Warner said.

At the same time, other Democrats in the House and Senate are growing impatient with the negotiations, which have been going on since the group of senators involved announced agreement on the general outlines of the plan with Biden at the White House almost a month ago. Some of them are advocating dropping the talks and adding the infrastructure package to a planned $3.5 trillion economic measure they could pass under Senate procedures without GOP support.

Taking that route would be a blow to attempts by Schumer and Biden to show voters that Democrats can find some common ground with Republicans. If an infrastructure deal can’t be reached, though, Schumer could use that to persuade Democratic moderates such as Joe Manchin of West Virginia and Kyrsten Sinema of Arizona to go along with a partisan budget package.

The bipartisan group met late into the night on Tuesday to try to hammer out remaining differences on the infrastructure plan. They remained at odds on how to pay for the measure and how much to spend on public transit, among other items.

“We’re not going to have a product ready tomorrow for consideration,” lead GOP negotiator Rob Portman of Ohio said Tuesday. Portman said that until there is an actual bill to consider he won’t support moving forward.

Both Portman and Sinema, however, said progress had been made when they emerged from the Tuesday night talks.

Another member of the group, Senator Bill Cassidy of Louisiana, said he “hopes” a deal can be reached by the end of the week but was uncertain because the timing depends on getting feedback from the White House, budget scorekeepers and lawmakers outside the group.

“The Republicans will probably all vote no to a person, but obviously many of us are planning to vote yes on final passage,” Cassidy said Tuesday night. He added that his goal was to complete an agreement by Monday.

Dick Durbin, the second-ranking Senate Democrat, said he expects that all 50 senators who caucus with Democrats will vote Wednesday in favor of beginning debate on infrastructure.

Schumer has argued that the Senate frequently votes to begin debate on a measure that is still being negotiated and that Wednesday is not the final deadline for bill text, rather a milepost to quicken the pace of talks. He said Wednesday that there will “many, many opportunities” for a bipartisan deal to be substituted as the bill under debate once a deal is reached.

Senator Susan Collins, a Maine Republican, called on Schumer to delay the procedural vote until the beginning of next week. She said forcing the issue “does not achieve any goal except to alienate people.”

“Obviously, our chances of getting Republican support are much higher if we have text to show them and a finished bill in terms of the framework, even if we don’t have all the language,” Collins said.

The group agreed over the weekend to drop enhanced tax enforcement audits from the bill, something the group was hoping would raise $100 billion. Portman said the group may substitute a delay in a Trump-era rule aimed at reducing rebates given to pharmaceutical benefit managers under Medicare Part D. Delaying the rule a few years could yield $80 billion or more, senators have said.

Another thorny issue for the group is how much funding to deliver to public transit. Senate Banking Committee Chairman Sherrod Brown, an Ohio Democrat, told reporters that Republicans are trying to spend more than 80% of new funds on highways, in violation of a longstanding tradition.

Republican Senator Shelley Moore Capito of West Virginia, who isn’t a part of the bipartisan group but attempted to strike a deal with Biden on infrastructure earlier this year, said the issue of how to pay for the bipartisan infrastructure plan “was always going to be the most difficult and it remains that way.”

Capito said Tuesday on Bloomberg Television’s “Balance of Power with David Westin” the demands from House Democrats including linking the infrastructure deal to a budget framework for additional spending and climate measures remains “an enormous problem for the White House and the bipartisan group.”