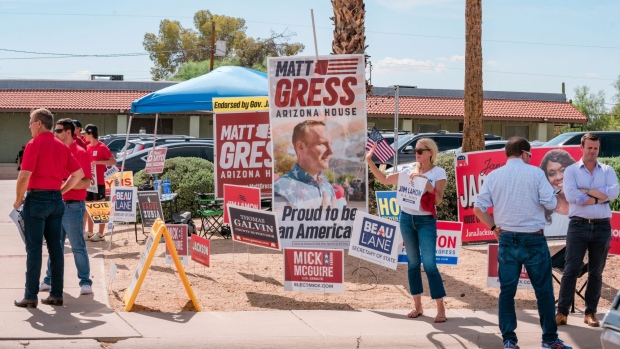 A voting booth sits at a polling station in Milwaukee, Wisconsin, U.S., on Tuesday, April 7, 2020. Wisconsin proceeded with its primary on Tuesday and voters defied stay-at-home orders to wait as long as two hours to cast ballots in the first state to hold an in-person election since the coronavirus pandemic sent Americans into their homes. , Bloomberg

Americans favored the Republican Party over Democrats on the economy in an ABC News/Ipsos poll, maintaining the GOP’s advantage on the issue heading into the Nov. 8 midterm elections.

While pluralities said they trust Democrats to do a better job on abortion rights and climate change, 38% favored the Republicans on the economy compared with 24% trusting the Democrats. About a third, or 29%, said they trusted neither party. The Democrats’ edge on abortion increased 8 percentage points from the previous poll in August to 46%, compared with 25% who trust the GOP more.

With inflation and the Federal Reserve’s series of interest-rate increases eating into Americans’ purchasing power, the poll’s competence gap on the economy was mostly unchanged compared with early August.

House Speaker Nancy Pelosi advised Democratic candidates to focus on “kitchen table” issues and her party’s message on what it’s done to ease the burden of inflation as the US heads into the final two weeks before the midterms.

President Joe Biden and his fellow Democrats have campaigned heavily against the Supreme Court’s decision to end nationwide abortion rights, seeking to energize their supporters and stave off losses in the midterms. Republicans are seeking to blame the administration for consumer prices that have risen at the fastest pace in four decades this year.

At stake in November is Democratic control of the evenly divided US Senate and their advantage in the House.

“We are in a very competitive election,” Representative Sean Patrick Maloney, head of the Democratic Congressional Campaign Committee, said on ABC’s “This Week” on Sunday. “We know its going to be a challenge. We know it’s going to be hard.”

The Oct. 21-22 ABC News/Ipsos poll of 618 registered voters has a margin of error of plus or minus 4.2 percentage points.