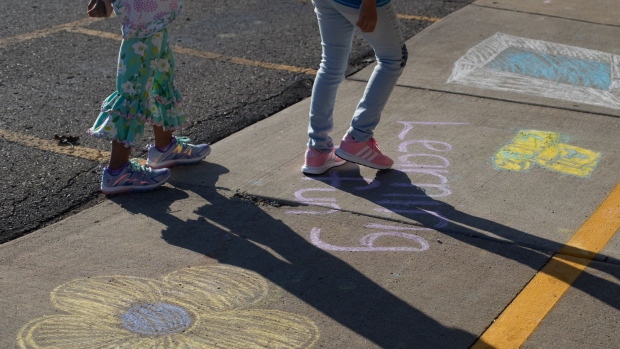 Students arrive at an elementary school during the first day of classes in Novi, Michigan, U.S., on Tuesday, Sept. 7 2021. Oakland County has issued a mandate requiring all K-12 students and teachers to wear masks inside schools due to the high Covid-19 transmission rate in the county. Photographer: Emily Elconin/Bloomberg , Bloomberg

(Bloomberg) -- Republicans are betting that parents’ angst about educational issues ranging from the quality of curricula to mask mandates and culture wars will help them retake suburban independents in upcoming elections.

Following a string of wins on local school boards and a strong performance in the suburbs in recent gubernatorial races, Republicans say their message is resonating among parents, whose frustrations have boiled up during the coronavirus pandemic, and now include the quality of classwork, mask mandates, and transgender rights.

“We’re getting back the suburban vote, and education is a key issue in doing that,” said Republican National Committee spokeswoman Emma Vaughn.

The messaging ties together long-standing Republican goals such as expanding charter schools and letting federal spending follow students who go to private schools with newer issues such as giving parents advance notice of controversial books being assigned and barring transgender student athletes from playing on teams that don’t align with the gender on their birth certificates.

A November poll by The Economist/YouGov showed that education trailed only jobs and the economy and health care among Americans’ top priorities. Education was ahead of issues including, national security, taxes and government spending, crime, immigration and civil liberties, among others.

That same poll conducted shortly before the 2016 presidential election, education was a lower priority among voters, behind the economy, health care, social security, Medicare and terrorism.

An NBC News survey in October found that voters’ trust of Democrats on the issue was half what it has been in previous years and comparable to the single-digit advantage the party had after Republican President George W. Bush signed the No Child Left Behind Act.

Parents were frustrated when remote learning dragged on. Some found as they watched their kids learn at home that they weren’t satisfied with the curriculum. Then, teachers pushed to be among the first to be vaccinated, but schools remained closed. When schools finally reopened, some parents objected to mask and vaccine mandates for children, who have not been as seriously affected by the coronavirus as adults.

Debate around culture war topics like race and LGBTQ rights further inflamed angst, raising questions about whether school administrators were focused on the right things at a time when parents were worried their children were falling behind.

Following the elections last month, House Minority Leader Kevin McCarthy pledged to put together a “Parents’ Bill of Rights” for Republicans to campaign on.

“Parents are starting to look under the hood, and they don’t like what they see,” said Republican strategist Rory Cooper.

Republicans lost ground in the suburbs during President Donald Trump’s administration, largely because of his coarse rhetoric. But the party sees education as the perfect issue to recapture those independent voters in the 2022 elections that will decide control of the U.S. House and Senate.

One development that threatens to hamper those efforts are this week’s signals from the conservative-leaning U.S. Supreme Court that it’s poised to roll back abortion rights by upholding a Mississippi law banning abortion after 15 weeks of pregnancy. The court is scheduled to rule by late June, potentially giving Democrats an issue to ignite their base and suburban women in the final stretch of the midterm elections.

In Virginia last month, Glenn Youngkin, a Republican, won seven out of 10 voters who listed education as their top issue in the governor’s race, according to the AP VoteCast survey of voters. Republicans also flipped school boards in suburban areas in Kansas, Colorado, Pennsylvania, Maine, Connecticut and New Jersey.

Youngkin said education is a top concern for voters, nationally. Momentum shifted toward him after his opponent, former Governor Terry McAuliffe, said that he doesn’t “think parents should be telling schools what they should teach.”

After his victory, Youngkin underscored the topic in a Nov. 17 address at the Republican Governors Association’s annual meeting in Phoenix.

“And I will tell you this entire campaign season, the polls kept telling us that education was the seventh, eighth, ninth most important issue,” he said. “Let me tell you, it is the top issue right now, and Republicans across the country can own this topic.”

After the elections, many pundits pointed to opposition to critical race theory, which conservative news media used to paint diversity curricula with a broad brush. An academic framework on systemic racism, it’s typically taught in graduate-level courses on the law or education, said Khiara Bridges, author of the 2019 book “Critical Race Theory: A Primer,” and is not taught in public schools.

“I teach a class on critical race theory, and it’s not even open to first-year law students,” she said.

Bridges, a professor at Berkeley Law, said the public discussion of critical race theory has conflated other ideas, such as diversity, equity and inclusion efforts or teacher training meant to raise awareness of why students might face different circumstances. She said the goal is to help the teacher understand the concept, not for the teacher to pass on those concepts to the class.

Some strategists say that critical race theory was deployed more to whip up conservative enthusiasm in recent gubernatorial races than winning over the suburbs.

Jessica Shortall, managing director of Texas Competes, a business coalition that makes the economic case for LGBT rights, said that there has been a flurry of bills on transgender athletes in state legislatures around the country this year, but out of about 75 bills, only nine have been signed into law, mostly in Southern states like Alabama, Mississippi and Texas.

She said that the bills are often framed as helping protect girls’ sports or prevent female athletes from losing out on a college scholarship, arguments that are targeted at suburban women concerned about unequal funding.

“I think it taps into a real feeling that people don’t take girls’ sports seriously,” she said.

Randi Weingarten, president of the American Federation of Teachers, one of the largest teachers’ unions in the U.S., said that school officials and politicians should do more to reach out to parents over the next year to reassure them that they understand their concerns after the disruptions to education during the pandemic.

“If people acknowledged the stress and strain that parents have been under, I think that would go a long way,” she said.

But she said that dissatisfaction with schools is being overblown, pointing to an Axios/Ipsos poll conducted in early November which found that 75% of parents around the country thought their local schools had done a somewhat or very good job balancing health and safety with other priorities since the start of the pandemic.

Daniel Wessel, a spokesman for the Democratic National Committee, said education might not be as big of an issue in the midterms if schools remain open over the next year. He said Democrats would also be able to point to vaccines being administered to school-age children and funding for universal pre-kindergarten and child care and the extension of a child tax credit currently under negotiations in Congress.

“We’re going to have a lot of actual concrete accomplishments that not only improve the educational experience in schools but also help parents and children more generally,” he said. “This will pale in comparison to Republicans making up stuff like critical race theory.”