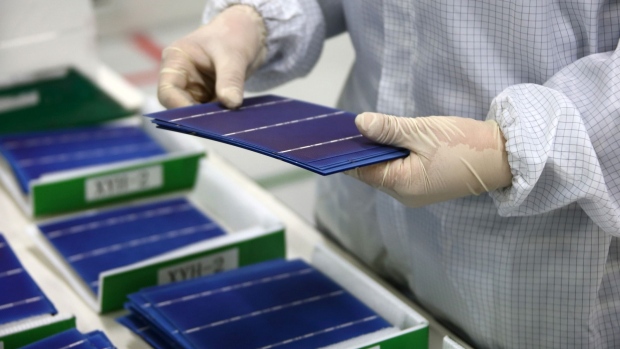 The directive from Republican Representatives Mike Gallagher and Chris Smith, as well as Senators Marco Rubio and Tom Cotton, signals tough oversight of the issue after the GOP takes control of the House in January. Trade curbs in the Uyghur Forced Labor Prevention Act are already thwarting imports of solar panels and other gear critical to renewable power projects, potentially at the expense of clean energy goals in the Inflation Reduction Act.

“We urge you to fully enforce the Uyghur Forced Labor Prevention Act as required by law, particularly when it comes to solar panels made with forced labor, which will get subsidies, grants and tax credits under the IRA,” the lawmakers say in a letter to Homeland Security Secretary Alejandro Mayorkas and the acting head of US Customs and Border Protection. “American taxpayers cannot be allowed to subsidize the effective enslavement of the Uyghurs and other predominantly Muslim ethnic groups.”

Under the one-year-old UFLPA, the US government assumes anything made even partially in the Chinese manufacturing hub of Xinjiang is produced with forced labor and can’t be imported into America. Companies can win exemptions if they are able to provide “clear and convincing evidence” the goods are free of force. The US accuses China of requiring hundreds of thousands of detainees -– mostly Uyghur Muslims or other minorities –- to work against their will in Xinjiang, allegations Beijing denies.

China hit back at the lawmakers on Tuesday, with Foreign Ministry spokeswoman Mao Ning saying at a regular press briefing in Beijing that the UFLPA was “based on lies that seriously disrupt normal photovoltaic trade between China and the US.”

Xinjiang is also a major supplier of polysilicon, a metal used in most solar panels today. And the restrictions have already led to the seizure and detention of hundreds of shipments containing solar gear. Some exporters preemptively have halted shipments to the US over concerns they’ll be detained at the border, contributing to a decline in renewable power installations and cancellations of new projects, the American Clean Power Association has said.

“After more than four months of solar panels being reviewed under the UFLPA, none have been rejected and instead they remain stuck in limbo with no end in sight,” Jason Clark, interim president of the ACPA said in a statement Monday.

The Republicans make clear they want the administration to take a harder line enforcing the law, especially as the IRA drives more demand for renewable power imports. That includes potentially blacklisting firms such as Longi Green Energy Technology Co., Jinko Solar Co. and Trina Solar Co., whose products have been detained, the lawmakers say.

Trina said in a statement that it has normal operations in many countries and regions and abides by local rules and regulations, including in the US. Representatives of Jinko and Longi Green did not immediately respond to requests for comment.

John Smirnow, general counsel of the Solar Energy Industries Association, said the industry “has made remarkable progress decoupling its supply chain from Xinjiang,” and “leading solar importers have demonstrated their compliance with the Uyghur Forced Labor Prevention Act.”

House Republicans have already signaled more oversight of issues around China next year. Representative Kevin McCarthy has said he’d form a select committee on China if elected speaker of the House, an evolution of a Republican-only task force he established in 2020. Gallagher was part of that task force, too.

--With assistance from Luz Ding and Lucille Liu.