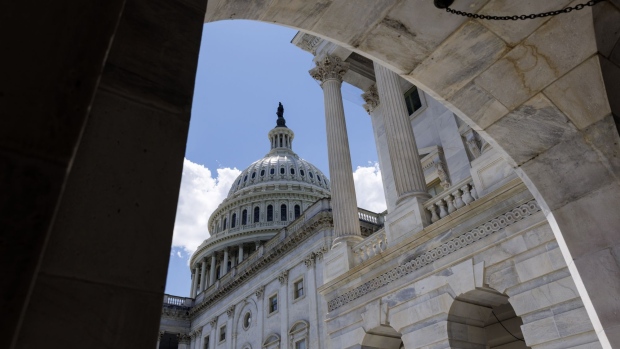 The US Capitol building in Washington, D.C., US, on Friday, Aug. 12, 2022. House members are back in Washington for one day only to vote on the Senate passed tax, climate, and healthcare package before leaving town until mid-September. , Bloomberg

(Bloomberg) -- House Republicans voted to keep earmarks for annual spending bills when they take control of the House next year, marking a significant victory for appropriators and swing-district members and a defeat for conservatives intent on reining in spending on pet projects for lawmakers.

The 158-52 closed-door vote by the GOP conference, confirmed by two people familiar with the vote, means that Republican leaders can bring spending bills to the floor next year that contain lawmaker-directed community project funding.

In the fiscal 2022 spending bill, there were $9.7 billion in such earmarks from members of both parties.

Republicans had banned earmarks when they controlled the House in 2011, arguing they led to waste and higher budget deficits. But the practice was revived by Democrats in the 2022 spending bill -- with provisions to increase transparency -- and swing district candidates heavily promoted their ability to bring back tax dollars back home.

Representative Kay Granger, the Texas Republican in line to become House Appropriations chair in the next Congress, abstained from participating in the earmarking process over the last two years but said last week that she’s considering using them in next year. She said the process has worked well so far and has let lawmakers cut through the bureaucracy of waiting for the executive branch to approve funding for local projects.

Arizona Republican David Schweikert said he remains opposed to earmarks as he remembers “the bad old days” of the practice being abused by lawmakers for personal gain.

Yet Schweikert said many members were swayed by an argument that Congress needs to claim the power of the purse.

“There’s an argument saying, look we do have certain things that have federal nexus, how do you do that open and transparent?” he said. “But it can’t be buying a museum for someone to curry favor in the district.”

--With assistance from Jack Fitzpatrick.