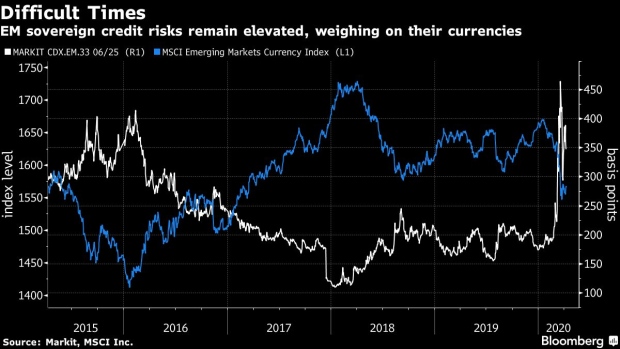 An employee works inside a currency exchange store at Bukit Bintang in Kuala Lumpur, Malaysia, on Tuesday, August 25, 2015. Foreign funds have dumped more than $3 billion of the nation's shares this year and the ringgit is near a 17-year low as political uncertainty clouds the outlook for an economy rocked by plunging oil prices and an emerging-market selloff. Photographer: Bloomberg/Bloomberg , Photographer: Bloomberg/Bloomberg

(Bloomberg) -- The decade-long surge in foreign-exchange reserves among emerging markets is coming to an end, highlighting the danger posed by future currency depreciation.

China’s holdings fell by $46.1 billion in March, the most since late 2016, official data showed late Tuesday. The drawdown accounted for the lion’s share of the $105 billion that 10 emerging-market central banks, including Turkey, India and Brazil, yanked from their reserves last month to stem currency losses.

The declines underscore the clamor for dollars that rocked foreign-exchange markets around the world during March, driving the MSCI EM Currency Index to its sharpest retreat since May 2012. And with commodity prices and export earnings in the doldrums as the coronavirus crisis deepens, the outlook for many emerging-market currencies isn’t much better.

“I expect another leg of strong downward pressure on emerging currencies as the magnitude of global recession becomes clear,” said Dariusz Kowalczyk, a senior emerging-market strategist at Credit Agricole CIB in Hong Kong. “Countries with external deficits and high external debt compared to foreign-exchange reserves are the most vulnerable.” Indonesia, India and the Philippines are most at risk in Asia, he said.

The Markit CDX Emerging Markets Index of credit default swap spreads blew out to record highs last month as traders factored in higher probability of missed payments amid the collapse in oil prices and concern China will be rocked by a slump in demand from Europe and the Americas.

Emerging markets suffered about $83 billion of outflows in March, a figure that may grow to between $500 billion and $750 billion if the exodus is anything like 2008 and 2015, according to Bank of New York Mellon Corp.

The prospect of a global recession may keep the U.S. dollar in demand over the next few months, raising the risk of intensifying capital flight and a further drop in reserves.

Should China’s reserves dip below the $3 trillion level, it would ring alarm bells for investors. Russia’s March international reserve assets, due to be released April 10, are forecast to have dropped by $10 billion. The Philippines is also set to publish reserves data this month.