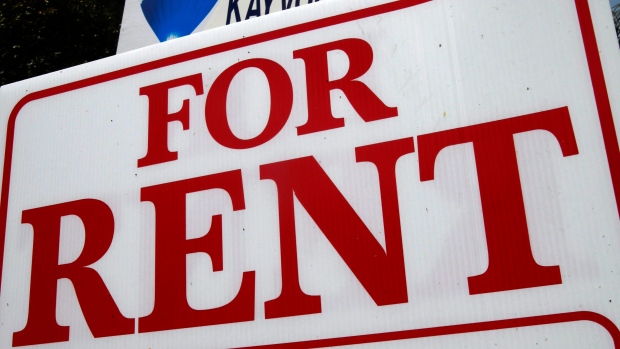 This April 6, 2011 file photo shows a "For Rent" sign in front of a home in Los Angeles. , The Canadian Press

As the economic impact of the COVID-19 pandemic ripples across Canada, another wave may crest within the week as rent comes due for residential tenants.

April 1 is a pressing deadline for tenants and landlords alike as the novel coronavirus keeps people at home and closes businesses, leaving tens of thousands of Canadians out of work.

"It reminds me of a 'Mission: Impossible' movie, where tick, tick, tick, the time is ticking down and someone has to try to save the day before everything explodes," said William Blake, a landlord who spoke Tuesday on behalf of the Ontario Landlords Association. "This is how a lot of tenants and landlords feel about this April 1 rent deadline coming up."

Advocacy groups for both landlords and tenants are calling on the federal and provincial governments to offer some kind of relief before April 1.

Geordie Dent, the executive director of Toronto's Federation of Metro Tenants Associations, spoke on behalf of a group of six tenant associations from across Canada that issued a joint statement on Wednesday asking for governments to ban evictions due to lack of payment and to offer financial assistance to renters.

"Tenants have basically had the legs cut out from under them," said Dent, noting employment insurance applications are even higher than during the 2008 financial crisis.

British Columbia's Premier John Horgan said Wednesday the province would suspend evictions and offering a $500 monthly rebate to help renters and landlords during the pandemic.

But other provinces and territories have moved to teleconference hearings, with Saskatchewan's Office of Residential Tenancies noting on its website that rents are still due.

Grassroots movements have sprung up in several cities in the past two weeks, calling on tenants to withhold their rent payments -- either out of necessity or in solidarity with those who can't make ends meet.

"We definitely agree that the government should be making a rent freeze and finding ways to support low-income people. But for now, we're focusing on just organizing amongst ourselves because we can't really wait," said Paterson Hodgson, a spokesperson for a Toronto-based neighbourhood group calling on tenants to go on rent strike.

Dent recommends that any tenant worried about making their rent on April 1 should first check to see what steps their province or territory has taken in regards to tribunals.

"You don't want to see people prioritizing their landlord's mortgage payments over their ability to feed themselves and their families," said Dent.

Prime Minister Justin Trudeau said Monday that federal officials are looking at ways to get money to community housing providers and the nation's renters.

Another government source, who was not authorized to detail behind-the-scenes talks, said there is an ongoing push with at least six provinces to sign up for a new rent supplement to avoid evictions for hundreds of thousands of renters.

Blake, who owns small rental properties in Ontario, Alberta, British Columbia and Nova Scotia, said he sympathizes with his tenants and doesn't want to have to evict any. But he said banning evictions or going about business as usual are just delaying an inevitable wave of evictions as landlords will eventually need the money to pay taxes, mortgages and maintenance fees.

"What we're pushing for, and we were hoping the tenant groups across Canada would be pushing for, is for the government to give tenants ... something like student loans, where you're in trouble, you need a loan, you can get it to pay your rent," said Blake, who pointed to the City of Toronto's rent banks as a model example.

Landlords "don't want government handouts. We only want the legal system that we use to continue to be efficient and run and operate, which means that the tenants pay rent," he said.