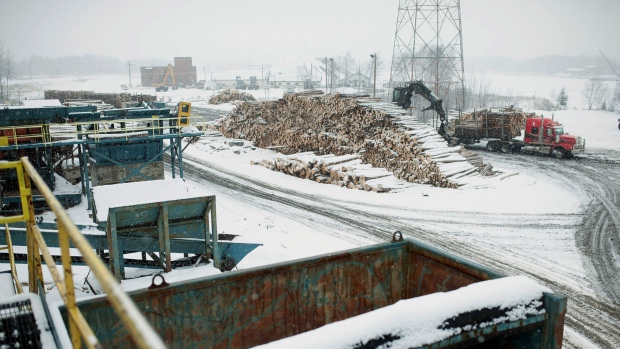 Raw lumber is unloaded from a truck at the Resolute Forest Products mill in Thunder Bay, Ontario, on Friday, Jan. 8, 2016. Bloomberg/James MacDonald

The company's quarterly conference call to discuss results was the last for CEO Yves Laflamme, who is retiring as of March 1 after 39 years with the company and being replaced by Remi Lalonde, Resolute's chief financial officer.

"My priorities essentially moving forward are to keep the focus and discipline around capital allocation ... if we do decide to monetize some assets, then focus on taking a little more leverage out of the business," said Lalonde in response to a question.

He said the company, which produces market pulp, tissue, wood products and various kinds of paper, will look at managing its assets to bolster earnings as paper prices erode, possibly looking at bolt-on purchases or extensions of its lumber division as well as more U.S. growth.

The forestry company, which keeps its books in U.S. dollars, said its quarterly loss amounted to 63 cents per share for the quarter ended Dec. 31 compared with a loss of 79 cents per share in the last three months of 2019.

Sales totalled US$769 million, up from US$668 million a year earlier.

"Our results reflect strong pricing for lumber and our wood products segment's ability to drive bottom line impact with strong end markets like those we've seen in the second half of 2020," said Laflamme, pointing to a rebound in U.S. housing starts and robust demand for repair and remodelling supplies.

"We also noted an increase in paper shipments in the fourth quarter, signalling the gradual recovery for those markets is underway. But it remains unclear whether they will recover enough to justify restarting the capacity we temporarily idled due to the rapid drop in demand during the outset of the pandemic."

Resolute took an $80-million non-cash charge in the quarter related to the suspension of its Baie-Comeau and Amos, Que., newsprint mills because of lower demand.

It reported operating income of $4 million compared with $97 million in the third quarter, reflecting an increase in shipments of $14 million, mostly paper, offset by $23 million in higher log and maintenance costs and the impact of the stronger Canadian dollar. It reported a credit of $10 million under the Canada Emergency Wage Subsidy program.

Excluding special items, Resolute said it earned $45 million or 55 cents per diluted share in its latest quarter compared with a loss of $53 million or 59 cents per share in the fourth quarter of 2019.