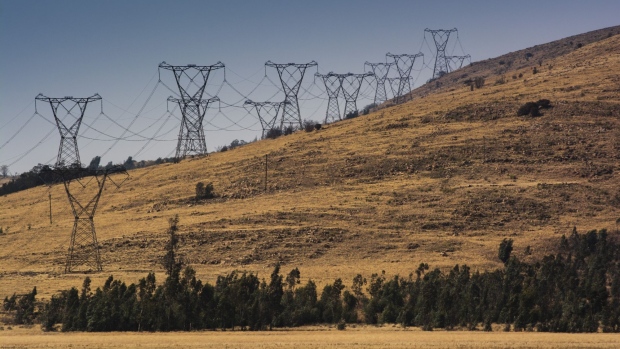 Electrical power lines hang from transmission pylons along a hillside in Mpumalanga, South Africa, on Wednesday, Aug. 7, 2019. Eskom, South Africa’s biggest polluter, said emissions of particulate matter that cause chronic respiratory disease are at their highest level in two decades as the state power utility’s financial meltdown has seen it skip maintenance and has triggered strikes. , Bloomberg

Freeman Nomvalo, who was named Eskom’s chief restructuring officer on July 30, has proposed options to reorganize the debt and the National Treasury is now doing further work on them, Gordhan said in reply to a question from a lawmaker in parliament in Cape Town on Tuesday.

“We will engage with lenders to Eskom to see what appetite they have to resolving the debt issue,” he said.

To contact the reporter on this story: Paul Vecchiatto in Cape Town at pvecchiatto@bloomberg.net

To contact the editors responsible for this story: Paul Richardson at pmrichardson@bloomberg.net, Mike Cohen, Hilton Shone