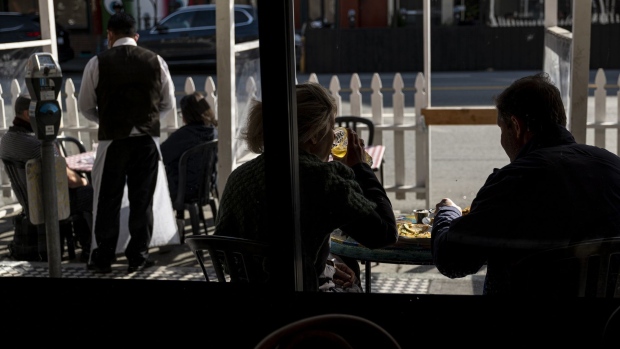 Customers dine outside at a restaurant in San Francisco, California, U.S., on Thursday, April 8, 2021. California officials plan to fully reopen the economy on June 15, if the pandemic continues to abate, after driving down coronavirus case loads in the most populous U.S. state. Photographer: David Paul Morris/Bloomberg , Bloomberg

(Bloomberg) -- Toast Inc., which helps restaurants handle payments, priced its shares at $40 apiece in an initial public offering, exceeding a marketed range, said people familiar with the matter who asked not to be identified because the information wasn’t public yet.

A representative for Boston-based Toast didn’t immediately respond to a request for comment.

At $40 a share, Toast would raise about $870 million and have a market value of close to $20 billion based on the outstanding shares listed in its filings with the U.S. Securities and Exchange Commission. Accounting for employee stock options and restricted stock units, the company would have a fully diluted value of more than $22 billion.

Toast’s software allows for diners to order online, in-person or over their phones. Restaurants can also use the guest data it captures to craft loyalty and marketing programs.

Incorporated in 2011, the company’s platform was used by about 48,000 restaurants as of June 30 and had processed more than $38 billion in gross payments over the previous 12 months.

Toast’s losses and revenue roughly doubled to a net loss of $235 million on revenue of $704 million for the first six months of 2021, compared with a year earlier.

After the IPO, owners of the company’s Class B shares will hold 99.5% of the shareholder voting power in the company, according to the filings. The Class B shares carry 10 votes apiece, compared to one vote each for the Class A shares sold in the IPO.

Toast’s three largest investors are Tiger Global PIP, Bessemer Venture Partners and Technology Investment Dining Group, or their affiliates, according to the filings.

The IPO is being led by Goldman Sachs Group Inc., Morgan Stanley  and JPMorgan Chase & Co. Toast shares are expected to begin trading Wednesday on the New York Stock Exchange under the symbol TOST.