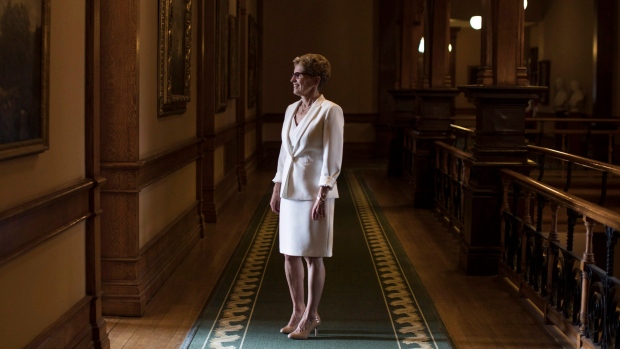 Ontario Premier Kathleen Wynne is pictured in the Ontario Legislature in Toronto on Tuesday May 30 , 2017 , The Canadian Press

A top restaurant consultancy firm is taking aim at Ontario’s plan to increase the minimum wage. In a statement released Wednesday, The Fifteen Group floated the idea that restaurants could make it blatantly obvious what is behind potential increases to the bill.

“It would be interesting if the restaurant industry would consider adding their own surcharge to guest bills that covers the required increase – such as a 20 per cent ‘WynneTax’  surcharge right beneath HST,” Fifteen Group President David Hopkins said in the release. “That way the consumer would be aware of the direct cost to them from this policy change and restaurants would not have to raise their menu prices.”

The consultancy firm argued the wage hike would cripple many restauranteurs, and that more subtle options for the industry include “menu engineering” and changes to the tipping structure. Wait staff who serve alcohol will see their minimum wage rise to $13.05 an hour from the current $9.90, while those who work in quick-service restaurants will see a boost to $15.00 from $11.40.

The firm highlighted the trickle-down effects of the hike, arguing the ripple effect through its supply chain will exacerbate the problem and lead to a 13 per cent increase to menu prices in 2018.

“Many suppliers (think local produce companies or meat companies) will have to increase their prices for restaurant supplies in order to combat the wage increase themselves,” the firm said. “The Fifteen Group estimates that in addition to the direct labour cost increase, this trickle-down effect will increase the overall product costs for a restaurant by an additional five to 10 per cent.”

“The total impact to the restaurant bottom line is staggering – restaurants will have no choice but to raise prices and pass this on to the consumer.”