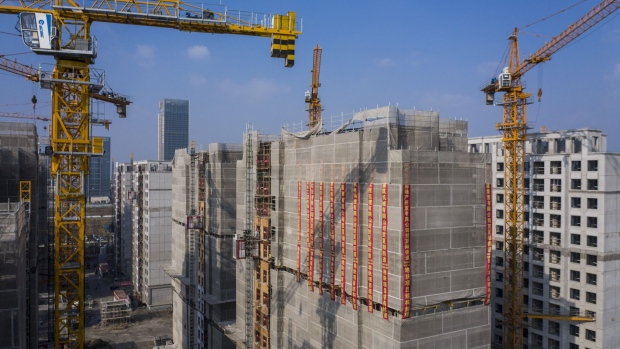 (Bloomberg) -- China Evergrande Group looks poised to begin a process of overhauling its balance sheet without a government bailout.

While ratings companies have yet to declare an official default, holders of two bonds issued by an Evergrande unit hadn’t received overdue coupon payments by the end of a 30-day grace period on Monday. S&P Global Ratings said on Tuesday that a default by the developer was “inevitable.”

Kaisa Group Holdings Ltd. halted trading in its shares on Wednesday without giving a reason. The company may have failed to repay a $400 million dollar bond that was due Tuesday.

After months of anticipation, Evergrande finally failed to meet obligations on time -- and it wasn’t the Lehman moment that some had predicted.

On the day that bondholders didn’t receive interest payments at the end of a grace period, a gauge of Chinese stocks in Hong Kong jumped the most in two months, with developers among the best performers. Sunac, which last month had to borrow money from its founder to help pay debts, surged 17%. Chinese junk dollar bonds climbed at least 3 cents on the dollar, the biggest gain in almost a month, according to traders.

The question has loomed over China Evergrande Group for months: Is the world’s most indebted developer too big to fail?

Investors finally have their answer. With a flurry of announcements that sent Evergrande bonds tumbling to record lows this week, the company and Beijing have made it clear that billionaire Hui Ka Yan’s property giant is headed for one of China’s largest-ever debt restructurings.

The list of Chinese developers warning they may be unable to meet upcoming financial obligations now includes China Aoyuan Group Ltd., another builder from the southern province of Guangdong to run into difficulties.

The company said last week there’s no guarantee it will be able to meet certain commitments due to liquidity issues. Fellow Guangdong-based developer China Evergrande Group used nearly the exact language a day later when announcing plans to work on an offshore-debt restructuring plan.