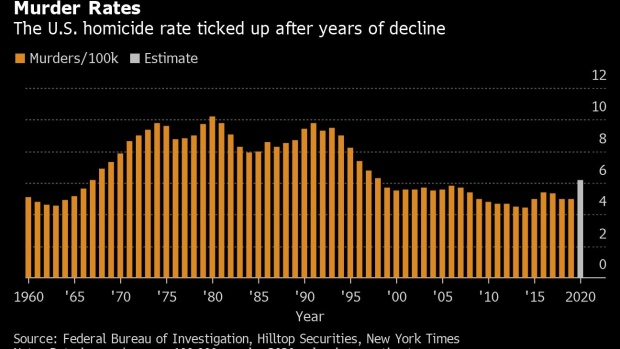 (Bloomberg) -- A rise in violent crime is a concern for some municipal-bond investors watching the economic recovery of U.S. cities, according to Hilltop Securities Inc.

The uptick, which pre-dates the pandemic, marks a reversal from decades of improvement. From the early 1990s to 2014, the rate of murders fell by more than half, but since 2014, the rate has slowly begun to climb, according to data compiled by the Federal Bureau of Investigation.

The resurgence represents another potential credit risk for urban hubs already grappling with Covid-19 recovery efforts and outmigration. Taken together with the prospect of higher taxes and more flexible work-from-home policies, cities run the risk of losing residents, handicapping their revenue. About 40% of urban officials have seen an increase in crime over the past year, a higher rate than non-urban communities, according to a survey by the National League of Cities.

“What I’m most concerned about is all of these variables building on top of each other in the near to medium term.” said Tom Kozlik, head of municipal strategy and credit at Hilltop Securities Inc. “This is something that investors are looking at and reacting to.”

The recovery and attractiveness of cities has been a cultural flashpoint throughout the pandemic, spurring impassioned opinion pieces from critics and defenders, and a migration of some Wall Street jobs to the warmer weather of Florida.

Crime has the potential to play a role in residents’ decisions to leave, or return to, their urban office setups. In New York City, the year-to-date murder rate in 2021 increased 13.5% compared to the prior year, the highest in about a decade, according to data from the New York City Police Department. Chicago has seen murders and shootings climb in 2021, though total crime is down since 2017.

Even though the statistics aren’t uniform across cities, Gallup surveys show perceptions of crime in the U.S. are at their highest since 1993, largely driven by Republicans, the polling company found.

”It has the potential to have some, at the very least, indirect impact on municipal finance if there is even just the perception of a permanent increase in crime in a city,” said Patrick Luby, senior municipal strategist at CreditSights.

Luby said there is broad variation in the data, which still generally shows rates lower than 15 years ago, and that is probably not as big of a factor on municipal bonds as the working-from-home trend.“All of those things have the potential to impact prices, tax revenues, and therefore the resources available to a city,” Luby said.

There is greater awareness of crime as more people are home and cities are emptier, according to Luby.

“We believe that rising violent crime has the potential to negatively impact municipal credit quality, and this is especially true for the medium and larger cities,” Kozlik wrote in a note this month. “Even if all types of crime rates are not rising, the perception of a rise in crime matters. This perception is enough to have political and fiscal consequences.”