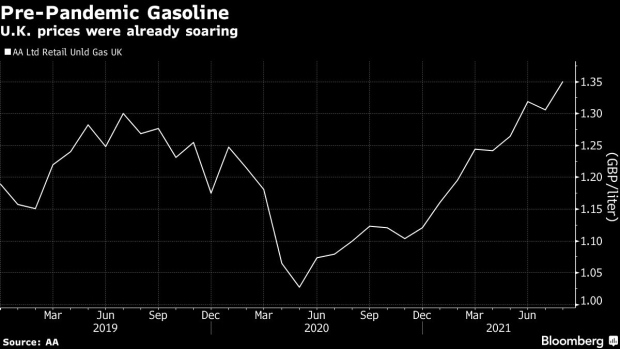 (Bloomberg) -- The U.K. government was in the spotlight Friday, confronted by the twin threats of soaring energy bills and the non-delivery of fuel to some retail filling stations.

BP Plc and Exxon Mobil Corp.’s U.K. unit both said Thursday that a shortage of truck drivers was hampering deliveries of fuels to some locations. Transport Secretary Grant Shapps told the BBC on Friday that the U.K. is not ruling out relaxing immigration rules for truck drivers, or even deploying the military.

The wider energy crisis has pushed smaller power providers out of business, affecting millions of customers. Larger rivals, being asked to take on their customers, want the government to backstop what might otherwise be a very unprofitable process.

Fuel retailers downplayed the extent of the disruption from a shortage of truck drivers, saying temporary delivery delays are confined to one region and very few stations being forced to close.

“Cases of complete forecourt stockouts have been rare so the resilience of retail fuels is not in question,” Gordon Balmer, executive director of the Petroleum Retailers Association, said in an emailed statement. “Some sites are confirming delayed deliveries” but “any issues appear confined to London and the South-East and appear temporary by nature.”

The energy crisis in Europe and the U.K. is being driven by the price of gas, and the situation will normalize after prices go down in five to six months, Iberdrola’s Chief Executive Officer Ignacio Galan said on Bloomberg TV on Friday.

The Spanish company, which owns Scottish Power, says utilities will ensure supplies to U.K. customers as the failure of small suppliers forcea millions of customers to switch providers: Galan.

The U.K. government is “moving heaven and earth” to tackle the problem, Transport Secretary Grant Shapps told BBC Radio on Friday. “We will do whatever is required in order to make sure there are sufficient drivers.”

A lack of drivers has already left supermarkets around the U.K. unable to fill their shelves.

Asked specifically whether soldiers could drive fuel trucks if supplies continued to be hit, Shapps told BBC Breakfast: “With regards to things like whether there’s a role for the military, obviously if there is, if that can actually help we will bring them in.”

It’s not all bad news for U.K. Energy supplies. The wind is going to blow again next week, and for a few weeks after, and the world’s longest sub-sea cable will start delivering Norwegian power from Oct. 1

Those are helpful developments, but they fall a long way short of rectifying the U.K.’s underlying energy crisis