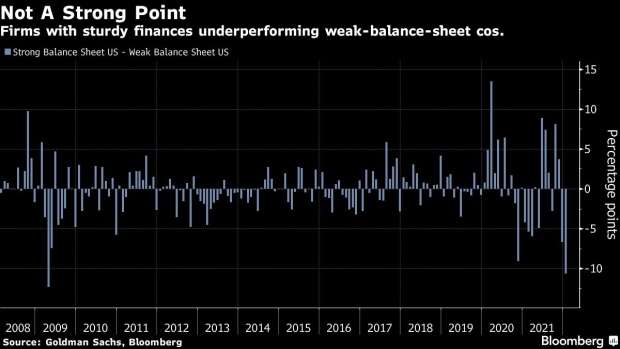 (Bloomberg) -- Fortitude among small-time traders and sanguine credit signals underlie what’s left of the stock bull case as markets skid toward their worst month since the pandemic panic.

While losses are piling up for once-hot trades beloved by the retail crowd from Netflix Inc. to the ARK Innovation ETF, individual investors have bounced back from volatility before, and remain -- potentially -- a brake on drawdowns. Indeed, before Thursday and Friday’s upheaval spurred selling among virtually every investor class, they’d snapped up about $12 billion of equities in the two weeks through Tuesday, the most on record in JPMorgan Chase & Co. data.

Day-trader faith is one possible cushion in a market where investor nerves are being frayed by looming rate hikes from the Federal Reserve. With the Nasdaq 100 in a correction and small-cap companies on the brink of a bear market, crash warnings are multiplying amid fear the central bank’s war on inflation will take out the economy along with it.

But other metrics -- arguably ones less given to hysteria than stocks -- suggest the end of the world isn’t nigh for equity bulls. Amid the market turmoil, risk premiums for high-yield bonds have stayed subdued, while stocks of firms with weak financing have significantly outperformed those with stable balance sheets.

All this suggests that as scary as the selloff looks, it’s merely an adjustment in investor positioning, as opposed to a wholesale exodus, according to Kara Murphy, chief investment officer at Kestra Investment Management. Richly valued tech stocks have surrendered their leadership but taking their place on the leader board are economically sensitive ones like energy.

“There are a lot of stocks that really benefited from an easier monetary and fiscal environment over the last year or two, and those are now seeing some of the wind come out of their sails as we think about being in a persistently higher rate environment,” said Murphy. “We’re not getting a big red flag from the high-yield markets about stocks and the health of the corporate sector.”

U.S. stocks have lost about $5 trillion in value since peaking last November as software and internet stocks with nose-bleed valuations led the rate-fueled carnage. Down 12% in January, the Nasdaq 100 is on course for its worst month since the 2008 global financial crisis.

Hedge funds, burned by their crowded bets on expensive growth shares, are quickly unwinding their positions. In the first two weeks of the year, they cut their net leverage by the fastest rate since April 2020, data compiled by Goldman Sachs Group Inc.’s prime brokerage show.

Amateur investors, however, are unbowed despite similarly mounting losses. Various factors have been cited as behind retail’s stubborn bullishness, from the repeated success of dip buying to the abundance of cash in bank accounts. Another big bull case lies in the strength of corporate America’s earnings power.

The ability of American firms to navigate supply-chain bottlenecks and still deliver robust results has been the backbone of the rally where the S&P 500 surged more than 110% in less than two years.

While profits from S&P 500 companies are estimated to expand 21% in the fourth quarter, half the rate seen in the previous period, that’s still more than twice as fast as the 10-year average, according to data compiled by Bloomberg Intelligence.

To be sure, this reporting season is off to a rough start, with bank earnings and results from Netflix underwhelming. Still, to Art Hogan, chief market strategist at National Securities, the record is set to improve.

“What’s going to underpin the market is the actual results and guidance versus our current fears that inflation and the Fed are going to somehow tip over the apple cart,” said Hogan. “So as we go into a more robust earnings season next week and we hear from companies whose multiples have contracted significantly, we’ll likely start to think about some of those feeling pressure as having been overdone.”

If stock performance is any guide, the fallout from higher rates will be asset valuations, as opposed to a credit risk. Cheap-looking stocks are back in vogue and expensive growth stocks are out. And yet a Goldman basket of companies with weak balance sheets has beaten its strong counterpart by more than 10 percentage points in January, on course for the best monthly outperformance since April 2009.

Investors are likely giving a pass on financially shakier companies because, thanks to robust earnings in 2021, American firms are sitting on a record pile of cash. Meanwhile, raising money in the bond market appears to be relatively easy.

Junk bonds have seen their yield spread over Treasuries hovering not far off the lowest levels since 2007. While the S&P 500 dropped Friday to a three-month low, the risk premium stayed lower than its Jan. 10 level -- a sign of no credit stress.

“You see credit spreads widen and people start to worry about the credit quality of corporate bonds if they think a recession is on the horizon,” said David Spika, president and chief investment officer of GuideStone Capital Management. “That is not a concern today in any way, shape or form.”